"Minot's Ledge Lighthouse" by Fitz James O'Brien is the Songs of Eretz Poem of the Day for April 29, 2014.  It was first published in Harper's New Monthly Magazine in 1861 and is therefore in the public domain and legally reprinted here.

I came across this poem after a Friend of Eretz submitted a poem to the e-zine inspired by the story of Minot's Ledge Lighthouse.  The original lighthouse (pictured) was completed in 1850 and stood on cast iron supports off Cohasset, Massachusetts, a particularly violent part of the Atlantic Ocean.  In 1851, a newspaper reporter by the name of Gordon spent a stormy night in the lighthouse along with Keeper Bennett.  The Keeper confessed to Mr. Gordon that he was worried about the structural integrity of the lighthouse.  Days later, the lighthouse was swept away by the sea with the loss of two out of the three keepers who were manning it at the time.  Reference to this and additional historical information may be found here:  http://lighthouseantiques.net/Minot's%20Ledge%20LH.htm. 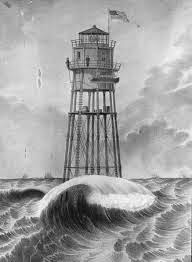 Like spectral hounds across the sky
The white clouds scud before the storm,
And naked in the howling night
The red-eyed light-house lifts its form.
The waves with slippery fingers clutch
The massive tower, and climb and fall,
And, muttering, growl with baffled rage
Their curses on the sturdy wall.

Up in the lonely tower he sits,
The keeper of the crimson light-
Silent and awe-struck does he hear
The imprecations of the night.
The white spray beats against the panes
Like some wet ghost that down the air
Is hunted by a troop of fiends,
And seeks a shelter any where.

He prays aloud - the lonely man-
For every soul that night at sea,
But more than all for that brave boy
Who used to gayly climb his knee.
Young Charley, with the chestnut hair
And hazel eyes and laughing lip,
“May Heaven look down,” the old man cries,
“Upon my son, and on his ship!”

While thus with pious heart he prays
Far in the distance sounds a boom-
He pauses, and again there rings
That sullen thunder through the room.
A ship upon the shoal to-night!
She can not hold for one half hour-
But clear the ropes and grappling-hooks,
And trust in the Almighty power!

On the drenched gallery he stands,
Striving to pierce the solid night,
Across the sea the red eye throws
A steady crimson wake of light,
And where it falls upon the waves
He sees a human head float by,
With long, drenched curls of chestnut hair,
And wild but fearless hazel eye.

Out with the hooks! One mighty fling!
Adown the wind the long rope curls.
Oh! will it catch? Ah! dread suspense
While the wild ocean wilder whirls.
A steady pull. - It tautens now!
Oh, his old heart will burst with joy
As on the slippery rocks he pulls
The breathing body of his boy.

Still sweep the spectres through the sky,
Still scud the clouds before the storm,
Still naked in the howling night
The red-eyed light-house lifts its form.
Without, the world is wild with rage,
Unkenneled demons are abroad,
But with the father and the son
Within, there is the peace of God. 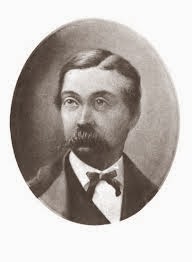 Fitz James O'Brien (pictured) was born Michael O'brien in Ireland in 1828.  He emigrated to the United States in 1852 and began contributing poems and short stories to various serials.  He is most famous for his science fiction short stories which profoundly influenced not only the development of the short story form but the development of the science fiction genre as well.  He died in 1862 of a wound infection in the War Between the States.  Reference to this and additional biographical information may be found here:  http://www.sf-encyclopedia.com/entry/obrien_fitz-james.


The use of octets and iambic tetrameter are reminiscent of a ballad, but the rhyme scheme is much more rich and complex than the usual ababcdcd of the ballad form.  The poet adroitly employs alliteration, consonance, and sibilance to his advantage, creating sounds like that of a violent, stormy sea.  The lighthouse itself is brought to life as a kind of "red-eyed" cyclops; the sea is transformed into a horde of raging, clutching, howling demons.

However, unlike the real-life fate of the lighthouse and its keepers, here the poet indulges in a happy ending, as the pious keeper is able to rescue his beloved son.  Would the poem have been more powerful if both keeper and son were claimed by the sea?
Posted by Steven Wittenberg Gordon, MD at 7:45 PM