"Snow Globe" by Kathy Fagan, a teacher in the MFA Program at Ohio State University, was offered by Poets.org's Poem-A-Day on January 17, 2014.  A link to the poem, including the poet's notes, may be found here: 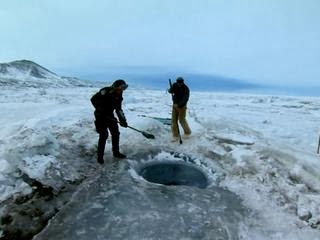 The poem was inspired by Encounters at the End of the World, a documentary film by Werner Herzog.  A review of the movie by the New York Times, including links to movie clips, may be found here:  http://www.nytimes.com/2008/06/11/movies/11enco.html?_r=0.  Note that the last seconds of the first clip depicts the Antarctic scientists pressing their ears to the ice to listen to the calls of the seals swimming below them--an image which inspired Fagan more than any other, as she reveals in her notes, and which is responsible for the eerie images and haunting feelings evoked by her poem.
Posted by Steven Wittenberg Gordon, MD at 8:39 AM