Review of "Clonazepam" by Donald Dunbar

"Clonazepam" by Donald Dunbar was offered by Poets.org's Poem-A-Day on January 28, 2014.  A link to the poem, including the poet's notes, may be found here:

Donald Dunbar holds an MFA from the University of Arizona.  He teaches poetry to chefs in training at the Oregon Culinary Institute.  More information about this poet may be found here: 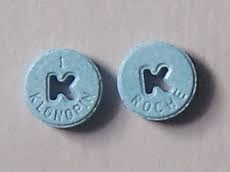 "Clonazepam" takes its name from a drug in the benzodiazepine class sold under the brand name "Klonopin."  It is commonly used to treat seizure disorders, but is also indicated to treat panic disorder.  In my experience as a physician, I have also seen it used off label to treat all kinds of other psychiatric problems, including Tourette Syndrome, as well as facial tics.

Dunbar gives a nod to the sonnet form with the fourteen-line length of his poem, but arranges the stanzas unconventionally--the first stanza has five lines, and the remaining three have three lines each.  Perhaps this unusual arrangement is being used to convey the message that a psychoactive drug can make a patient nearly normal, but there will still be some disjointedness and side effects.
Posted by Steven Wittenberg Gordon, MD at 9:30 AM