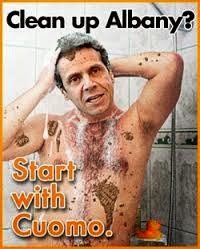 I composed "Cómo, Cuomo?" in response to the New York governor's recent jackassery.  It is a pithy little sonnet that dares the dictatorial fascist to make New York so awful that all of the good citizens (ie: the ones who oppose him and who do the actual work and pay taxes) leave the state.  Then Mussolini junior would be left with the useless segment of society that lives off government hand outs.  It would serve him right.  I doubt the poem will every be published--more's the shame--but I feel better having written it.
Posted by Steven Wittenberg Gordon, MD at 12:54 PM