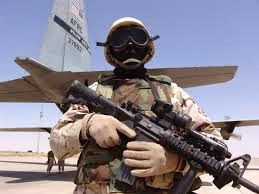 "The Raven" is the latest addition to my poetic memoir, A Wave of Poetry.  The KC-10 that was tasked, among other things, to re-deploy me from Indonesia to New Jersey, picked up three Phoenix Ravens as passengers.  They were on their way to Japan, and so were we.

Phoenix Ravens are part of the Air Force's security force.  They guard jets on the ground--to the death if necessary.  The combat training that they go through is brutal.  As a flight surgeon in garrison, I was on call for Ravens who were injured during training--and injuries were not uncommon.

One of the Ravens approached me with a medical problem.  It turned out to be pretty serious--a deep skin abscess with surrounding cellulitis.  In the United States, I would have hospitalized him, but doing so was unthinkable where we were in Thailand.  So, I busted out my surgery kit--that I carried with me but never thought I would ever have to use--and did what I had to do for him.  Fortunately, the operation was a success.  The odds were certainly stacked in that my patient was a tough, otherwise robustly healthy physical specimen.

In "The Raven," a parody of Edgar Allan Poe's more famous work, I tell the story of the rather gruesome operation that I performed on the Phoenix Raven in Thailand.  I followed Poe's intricate rhyme and rhythm schemes to the letter.  This was no easy task and gave me a whole new respect for Poe the poet.
Posted by Steven Wittenberg Gordon, MD at 4:55 PM