Review of "Mrs. Cavendish and the Dancer" by Stephen Dunn

"Mrs. Cavendish and the Dancer" by Stephen Dunn was offered by Poets.org's Poem-A-Day on January 6, 2014.  A link to the poem, including the poet's notes, may be found here:

Once a professional basketball player, Stephen Dunn (b. 1939) is currently the Distinguished Professor of Creative Writing at Richard Stockton College.  His poetry collection, Different Hours, won the Pulitzer Prize for Poetry in 2001.  Additional biographical information may be found here: 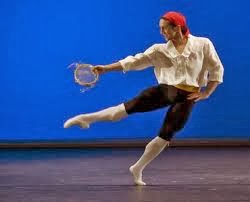 Mr. Dunn also reveals in his notes that he is not yet sure whom the narrator of this narrative poem is.  It may turn out to be, but is not necessarily, the poet.  I believe that the narrator may turn out to be Mrs. Cavendish's conscience or her more sensible inner monologue--she could certainly use one.
Posted by Steven Wittenberg Gordon, MD at 11:01 AM