A Poem for Martin Luther King Day by the Editor 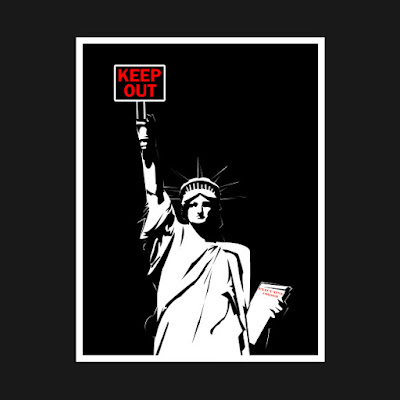 Donald Takes Liberties with Emma
Steven Wittenberg Gordon
Give me your tired, your poor,
Your huddled masses yearning to breathe free,
The wretched refuse of your teeming shore.
Send these, the homeless, tempest-tost to me,
I lift my lamp beside the golden door!
--From Emma Lazarus’ famous poem displayed on the Statue of Liberty
Give me your desired, your dour,
Your coddled masses earning six not three,
The richest recluse of your north-most shore.
Send these, no Haitians, hempless-tost to me,
I give my stamp when gold comes through my door!

Poet’s/Editor’s Notes:  I did not believe Donald Trump was a racist until a few days ago when he actually met the definition--he advocated treating Haitians differently because they are Haitians, a fact which he does not deny.  Even Trump’s defense that he was advocating that the United States should have a merit-based rather that a quota-based system for immigration, does not convince me.  Our president is a racist, and it is safe to conclude that some of his policies will be guided by his racist ideology.

I may support some of Trump’s policies in the future but I will do so with much greater care.  That does not make me a racist, as I am sure Dr. King would have agreed.  Racists can still have good ideas.  An idea from a racist is NOT the same thing as a racist idea.  On the contrary, sometimes racists have excellent ideas, such as the Founding Fathers, racists all--out of the context of their era and by today’s definition.  Without those “racists” from our past, we would certainly have nothing to celebrate on this Martin Luther King Day.