Poem of the Day: “The Yellow Monk” by Kaitlyn Frazier, Frequent Contributor & Poet of the Week 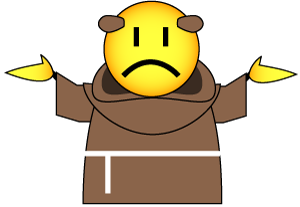 He sings with a strum
He sings all the live-long day
O’ swing-swinging he sways to the ringing
Of the chapel bells dinning through May.

Bee-biddly-bang
He shrieked with a clang
He shrieks all the curs’d-long day
O’ sweep-sweeping he cowers from the beating
Of the friar’s steel-clad and glist’ning brace.

Fo-fabbly-flop
He sighed with a drop
His heart with a drop after the battle-born day
O’ swipe-swiping comes the maid all a-piping
With her horn brimmed with bright’ning
And her rosy and ruddy, ripe face.

For this young fellow
Grew quite tired of being yellow
And yielding to his master’s tough stroke
So, he took his young Ruth
Whom he’d known since his youth
To hale land afar and sever this yoke.

Lo, he did not understand
Religion knows not sea nor strand
Therefore, they were constantly followed
Followed by his monk’s-cap and band.

Guilt consumed the poor fellow
Who wanted no more to be yellow
But was now more yellow than before
For, to jump ship with a whore
Who was the lowest of born
Was in the worst way
His downfall and ill-fate to be sure.
Long story short
His life was of the same: short.

Poet's Notes: I had fun with this one; I love rhyming poems that get stuck in your head and have a sing-song vibe to them. The Canterbury Tales played a role in the crafting of “The Yellow Monk”. Throughout the Tales, almost every character is imperfect; if you’ll notice, the friar beats the monk, when the friar is supposed to be a godly man and wears a glist’ning brace which he is not supposed to have according to the oaths he took when he became a friar. The monk runs from his religion with his floosy just because he was scared of the friar, and he also swore oaths. I also portrayed the harlot as a maiden at first to keep the theme of the false characters. In the sixth stanza, I used monk’s-cap to portray the ugly monk haircut they wore, and the band stands for the holy necklaces they wore. I feel like some irony becomes more prevalent in the seventh stanza when he realizes his actions has made him even more of a pansy than he was before, and I describe his cloak as being angelic.
Posted by Steven Wittenberg Gordon, MD at 12:27 PM