Poem of the Day: "Cave Painter" by James Frederick William Rowe, Frequent Contributor and Poet of the Week

Songs of Eretz Poetry Review is pleased to present “Cave Painter” by James Frederick William Rowe, Frequent Contributor and this week’s Poet of the Week.  "Cave Painter" is the second in Rowe's "Caveman Trilogy."  The first poem appeared in the Review yesterday, and the third poem will appear in the Review tomorrow. A biography of the poet may be found in our “About Our Editor & Frequent Contributors” section. 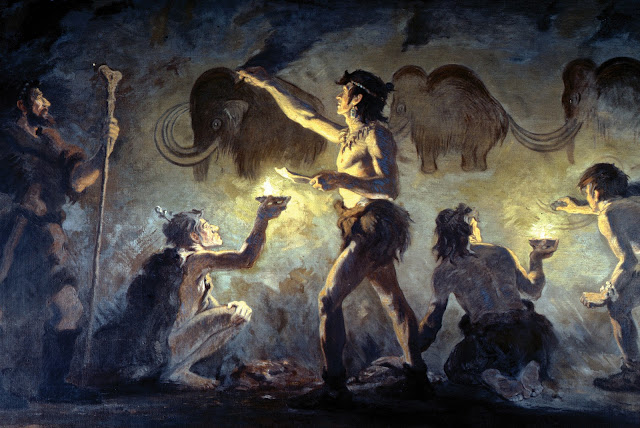 And light, these are no stars
In these caves, just fire
Which casts strange shadows upon the walls
The images of their sleeping dreams

And man, witness of all things
Thinker, dreamer of all things
So I dip my finger in dead embers
To mark my dreams, to trace my shadows

And so I paint, first with ash
Then with dye which stains my outlines
Gives life to images once so dead
Now in motion, caught in the act

And I their trapper
Or am I the one trapped?
Lost to the visions which compel my hand
They will think me mad
And they will think me holy
They have not erred in either case
I am possessed of mighty thoughts
Of dreams which must be seen

And kept, and preserved!
For all ages, for all time!
My dreams must not be lost to waking
They must not fade with the years

And so I, the painter
Have now become a priest
Of the magic of these forms
The enchantment of these lines

And for a thousand generations
This world of ice and sky
Of man and beast and wind-swept fields
Shall not fade away, shall not be lost

Poet’s Notes:  This poem is part two of my "Caveman Trilogy" and takes as its inspiration the abundance of cave paintings found scattered across primeval human settlement.  I have turned the original cave painter into a sort of priestly-ecstatic figure, who at night begins to paint the images of his "waking dreams" upon the walls as the rest of the cave sleeps. He is "possessed" by the inspiration—the spirits of the fire and shadow working upon him—that the world he knows—perhaps recognizing, presciently, that one day man will not live as he did—should be "preserved for all ages, for all time". It is notable that he characterizes his thoughts as both "true and false", indicating that these are as much fantasies as depiction of reality, indicative of the mystical character of the whole procedure.

I begin each stanza (excluding the first) with "and". This gives a sense of enjambment that I thought suited the ecstatic character of the painter. As the poem progresses, the setting transitions to a focus on the painting, and then to the painter's mission, ending with the recognition that the painter is marking his own existence as much as those of the images. Though the cave painter is anonymous both in reality and in the poem, he is nevertheless remembered by the work he left behind. He has "stole(n) life from time".

The ending of the poem required some attention after I had a degree of difficulty completing it after the initial spark of inspiration ceased working on me. So it was that my subway poem was completed at home, after some deliberation and thought. Nevertheless, it wasn't a difficult poem to write, and came rather naturally.
Posted by Steven Wittenberg Gordon, MD at 2:09 PM