Poem of the Day: “Bear Cult” by James Frederick William Rowe, Frequent Contributor and Poet of the Week

Songs of Eretz Poetry Review is pleased to present “Bear Cult” by James Frederick William Rowe, Frequent Contributor and this week’s Poet of the Week.  This is the first poem in a “Caveman Trilogy”--the second poem will appear in the Review tomorrow, and the third the next day.  A biography of the poet may be found in our “About Our Editor & Frequent Contributors” section. 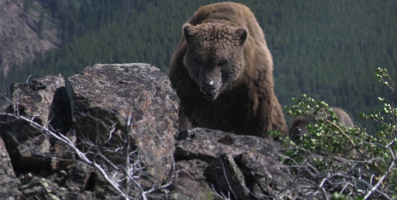 In glacial caves
We find you
Bear bones
Primordial relic of man
Against walls that knew
First fires
Your skull looms on
Shelves of stone
As gathered beneath
Your bones are arranged
For veneration for rites
Older than our tongues
Sung in nights
We cannot recall
Nights which still sing
To us across ages
Softly, strongly
Beseeching our ancestral
Worship of your primal power
The respect of savages
For all that is mightiest
On this Earth

Poet’s Notes:  This poem is about the most ancient form of religious reverence known to man: the Bear Cult. The veneration of the bear (indicated by the ritual organization of the skull and bones of a bear skeleton) goes back to the Upper Paleolithic (50-10,000 BC) and is found spread throughout Eurasia and North Africa, indicating a religion that may even predate the separation of the various peoples and races of these areas. As the worship of the zaftig Venus sculptures found in Europe dates only back to about 26,000 BC, the worship of the bear appears an even more primitive example of religious veneration, and one which, due to its scope, may well be the last time mankind as a whole – or something close to it – worshipped the same type of deity – a sort of caveman ecumenicism.

I was first introduced to the Bear Cult through the works of Joseph Campbell (specifically Primitive Mythology) and the Jean Auel's Clan of the Cave Bear series of novels, and have been fascinated with the topic ever since. When inspiration struck—as per usual, on the subway—I chose to give it give the bear cult life again in verse.  As the poem flowed rather naturally from the font of inspiration and did not require much to alter to my satisfaction, the poem's aesthetic structure is not especially complex. I haven't much to comment on the bulk of the poem, but I believe the ending captures well my idea of why the bear was worshipped in ancestral times: as a paragon of the might these creatures embody. One must remember that the bears in question were often the extinct cave bear, which was massive compared to even grizzly bears (they could grow as big as ten feet long), and no doubt these giants of the woods and mountains impressed the caveman.

Finally, the poem represents the first part of my "Caveman Trilogy", a loose collection of three poems detailing the life of these primal ancestors. My y-chromosomal DNA signatures go back to Europe during the ice age, so perhaps I should count these poems as constituting something of ancestor worship. I am not opposed to this idea.
Posted by Steven Wittenberg Gordon, MD at 9:38 AM