Poem of the Day: “Midsummer's Day” by Mary Soon Lee, Frequent Contributor & Poet of the Week

Bees clung to the purple clover;
butterflies swayed on the grass stems,
but the soldiers stayed in their tents.

Midsummer's Day,
but there would be no bonfires,
no celebration.
The demon fire, the burnt towns
had marked them all.

A messenger came to Donal's tent.
"Your Majesty, a package from King Xau."

The messenger, prudently, said nothing.

"Get out," said Donal.
He tossed the bundle to Rose, his woman,
who started fiddling with the silks.

Donal left the tent,
stretched,
looked across the grass
to Xau's encampment.
A scrap of purple rose into the air.

Donal squinted:
a kite, a fucking kite.
Xau had to be fucking kidding
if he thought Donal
was going to fly a kite.

The purple diamond climbed higher.
Donal's sentries shouted,
more animated than they'd been in weeks.
Other soldiers looked out of their tents,
saw the kite, came outside.

"Fuck," said Donal to nobody.
He went back into his tent.
"Rose, have you ever made a fucking kite?"

Across the meadow,
King Xau listened to his personal guards
quarreling over whose turn it was
to control the kite.

He went back into his tent
where six of his captains were waiting,
handed them each a bundle of bamboo,
paper, silk, string.

"Try your hardest," he said.
"The unit whose kite performs best
will be off latrine duty for two weeks."

Xau went back outside,
sat cross-legged on the grass
and wrote to his wife about kites,
and the bees sucking on the clover,
and the overcooked rice he'd had for lunch,
all the small things
that would not alarm her.

As the long day wore on
more kites dipped and rose
on the skittish breeze.
At dusk, they held a contest,
the breeze no more than a whisper
so that most kites plummeted ignominiously.

Two boys, one from Meqing, one from Innis,
unable to speak each other's language,
between them crafted a wolf head
from leftover scraps of paper.
The wolf head darted and soared
ten full minutes.

Afterward, Xau presented each boy
with a tiny jade horse.
As they thanked him,
he tried not to think
how young they looked.

Two hundred years later,
when Xau and Donal and their soldiers
were long buried,
their deeds reduced to song,
the children of Innis and of Meqing
flew kites each Midsummer's Day. 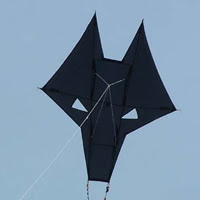 Poet's Notes:  This is part of "The Sign of the Dragon," my epic fantasy in verse. Set during a bleak section of the tale, this poem is meant as a diversion for both the soldiers and the reader. More poems from "The Sign of the Dragon" may be read at www.thesignofthedragon.com.
Posted by Steven Wittenberg Gordon, MD at 2:35 PM