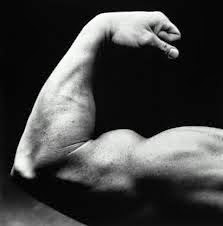 Dying isn't easy, even when you have the strength
To lift a B52 and pull the injured from the wreck,
Fly the maimed and dying to hospitals faster than a helicopter,
Or sweep a young woman off her feet, saving her
From a mistake that would have cost her future children's lives.
These feats that helped salvage our side, these muscles
That helped to win a war, this humble heroism that sought no praise--
None of that helps when you're fighting for your life at 85,
Gasping with half your diaphragm paralyzed
As surely as if you'd taken a bullet all those years ago.
Houdini couldn't survive a sucker punch, and even Steel
Seldom blocks modern weapons.  Worse still,
Entropy--that supervillain, unconquered enemy of life--
Holds sway even over the brave and the just,
The compassionate, the strong--especially these,
Who expend their lives, their energy, at a furious pace
In saving others.  At least his children's once-small hands,
Now grown, clasp his with saving grace,
Their sole mission to stand in for his strength--
Not heroes reborn, just concrete, heartfelt proof
That the saving matters.

Poet’s Notes:  I think a lot about the daily lives of superheroes, the trials they face to continue their mission, and the costs of human living that even they must pay.  Dad was always our hero.  From a young age, we knew he'd served in World War II.  The stories he told were few, but he always made a point to praise the courage and sacrifices of others and downplay his role.  But we had other ideas.  When Dad went on his first away assignment to the United States Army Training and Doctrine Command (TRADOC) when I was ten, I made him a welcome-home card with a drawing of Dad as Superman (alluded to as "Steel" in the poem).  We were conscious of Dad as an older father as someone extra-special, to be treasured; no matter his age, Dad remained strong and courageous, wise but young at heart.  In Kentucky, when Dad was fifty-nine and they were ten, my brothers coined the phrase "World War II muscles" in genuine admiration for Dad's strength.  We all loved this concept and used it with pride through Dad's eighty-fifth year.  In this poem I decided to imagine what it might have been like if he'd really had these superpowers--but still met his own very mortal end.

Editor’s Note:  The themes of "WWII Muscles" are universal but told in a deeply personal, moving way.  The conclusion is well done, with just the right amount of poignancy and sentiment--a fine tribute to a fine man.  "WWII Muscles" was first published in the August 2014 issue of Songs of Eretz Poetry E-zine.