Poem of the Day: “One month since” by Carolyn Martin

Songs of Eretz Poetry Review is pleased to present “One month since” by Carolyn Martin.  After sixteen years in academia and twenty-four in the business world, Carolyn Martin is happily retired in Clackamas, Oregon where she gardens, writes, and plays with creative friends. Her poems have appeared in publications such as Antiphon, Stirring, Naugatuck River Review, and Persimmon Tree. Her second poetry collection, The Way a Woman Knows, was released in February 2015 by The Poetry Box, Portland, Oregon www.TheWayAWomanKnows.com. 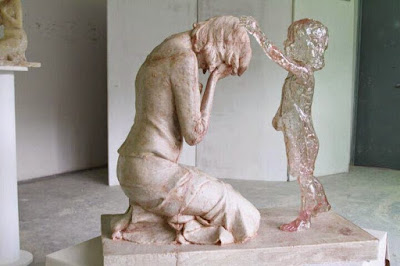 the baby died and weeks-worn clothes languish
on the floor, days of dishes in the sink.
My ragged husband tries, but can’t get near.
He summons up, A short life is life.
As if five syllables could heal.
I despise his words and turn my back.

Weeks and friends shy away after casseroles
and cakes and awkward sympathy.
Calls stop and cards stack unopened in the trash.
My body hugs the indent on our bed.
We kept him warm and prayed.

Thirty days since and I cannot bear the sadness
I’ve become. But then his sister’s voice –
three-years old, brave – breaks the dark, startles me.
Pancakes, Mama. Please? As if my hands could find a way.

She doesn’t know I cannot stand her father’s eyes
or mop a floor or dust the last photograph.
Or how I scream, A mother never loses loss,
when no one wants to hear. Yet I claw my way
across unwashed sheets, past pillows pounded
down to half their size. Perhaps today one thing
I’ll do, I surprise myself. Perhaps. One thing.

Poet’s Notes:  I thought I understood grief; that is, until I met a family of four on a flight to Maui two years ago.

I sat next to the mom and a three-year-old daughter and across the aisle from the dad and a seven-year-old daughter. In the course of our chit-chat, the mom kept referring to her three children. When she saw my perplexity, she explained that they always include their middle child in any conversation about family. This child, their only son, had died four years ago at the age of two. He died at home in his parents’ bed after battling a rare form of cancer for eleven months. His mother explained that she was so grief-stricken that she couldn’t get out of bed for a month.

That is, until the day her three-year-old daughter stood at her bedside and asked for pancakes for breakfast. It was this simple request that halted her descent into despair. If she could get out of bed to make breakfast, she thought, perhaps she could do other things. One small gesture at a time brought her back to her family and to life.

Now wherever the family travels, they carry a little box with the toddler’s ashes inside. At their daughters’ request, they add travel stickers to its outside so their son will know where they’ve been.

Four years after his death, she says, they are so grateful for the short life that had touched them so deeply (A short life is life). This poem honors this extraordinary family by bearing witness to the universality of grief, the devastating pain of losing a child, and the hope of recovery.

Editor’s Note:  "One month since" was the winner of the 2015 Songs of Eretz Poetry Award Contest.  It would be polite to say that there were many fine poems submitted and that picking a winner was difficult.  However, of the 340 poems that I considered, Ms. Martin’s clearly stood out from among the rest.

I was moved to tears by this haunting and beautiful portrayal of devastating loss and the hope for eventual acceptance and recovery--even before I read Ms. Martin’s notes, which only cemented my opinion of the piece even more.

"One month since" was first published in The Delmarva Review in 2014.  It was reprinted in the February 2015 Songs of Eretz Poetry E-zine contest issue.
Posted by Steven Wittenberg Gordon, MD at 1:36 PM