Poetry Review Double Feature: "For the Amusement of God" and "Burning" by James Frederick William Rowe

Songs of Eretz Poetry Review is pleased to present "For the Amusement of God" and "Burning" by James Frederick William Rowe.  Mr. Rowe is a Rhysling-nominated poet and author out of Brooklyn. In the last few years, he has cut out a substantial niche in the speculative poetry front, having seen over thirty poems published internationally in such markets as:  Big Pulp, Tale of the Talisman, Heroic Fantasy Quarterly (where he is an editor), Andromeda Spaceways Inflight Magazine, and Bete Noire.  He is a frequent contributor to the Songs of Eretz venues.

When he is not writing verses and crafting yarns, he is employed as an adjunct professor of philosophy in the City University of New York, is pursuing a Ph.D. in the same subject, and works a variety of freelance positions. The poet's website may be found at http://jamesfwrowe.wordpress.com.

For the Amusement of God
James Frederick William Rowe 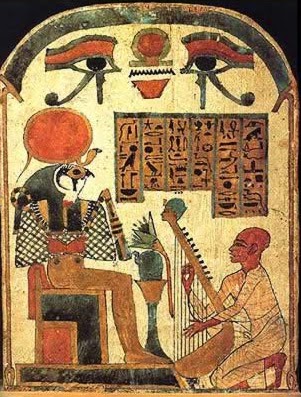 Damn!
Those are a lot of horticulturalists!
Quoth the alien
Whose large
Glassy
Obsidian orbs
Which passed for organs ocular
Peered through a spy glass on a spinning ship
I wonder what crazy things
These savages would do?

You guys should totally quarry rocks from way over there
Huge rocks
And make them into a giant building
And can you believe it?
They listened
Cutting stone
Lugging it
And piling it
Into pointed shapes that spotted the desert
And sunlight shone on gold tipped peaks
That could be seen from miles off
In a splendid
Sparkling
Shining
Spectacle

Then there was a famine
The crops failed
And he said to them
You know you totally should
Kill Jethro
That guy will make the crops grow
If you burn him alive
And Zinc!
They did it!
I can't believe that Jethro is burning
On a pyre screaming his head off
Until silenced by asphyxiation
Agonized by fire
Ashes which were him flutter in the wind
And spread light into the dim dusk

So
What about some gifts?
I could use a lot of shiny things
It'd be great if you piled those over here
So they did
Crafting treasures to heap on the altars dedicated to him
Ivory
Images
Icons
Idols
And he especially loved those statues
Which generously depicted
An Enormous Talent
In the crafter
Of course

Joke’s on you, fella
Now where's my tithe? 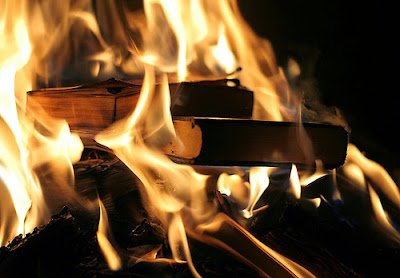 I saw a beautiful thing burn
And I watched the flames
Within which devils danced
While near beside an angel stood
Appraising all with cold regard
And to whom I asked:
"What say you of what has transpired?"
To which he replied:
"It is in their nature to burn."

Poet's Notes on “For the Amusement of God”:  “For the Amusement of God” was written as a dark take on the exploitative element in religion as well as being inspired by those rather off-the-wall theories of ancient alien visitation to earth.  It is a sad truth that religion can take on an exploitative character. Though religion has, in the main, been a positive force for humanity, priests have often bilked a gullible people and taken advantage of their superstitions in order to exact an often personally aggrandizing tribute. This poem specifically features such exploitation in the context of earliest sorts of religion, as in ancient Egypt, which usually involved slavish devotion to a divine spokesman (as with the Pharaoh), such that they would quite literally sacrifice anything to this man, up to and including their (or others') lives.

My grandmother was still alive when I wrote this poem, and she was always quite disturbed by the fact that I talked about a bunch of primitives burning Jethro alive because the alien decided to see if they'd do it. I myself find this the most darkly funny part of the entire poem, especially with the alien's curious ejaculation of "Zinc!"

Then there is the rather wacky idea that the deities of old were alien conquerors who ruled as kings. This is seen in conspiracy theories regarding the Annunaki, in that Ancient Aliens TV show, in David Icke's rants, &c. This idea was absolutely ripe for a poem, especially as I had in mind to twist it into a humorous one. By placing the idea in a comic context, I found that the ridiculousness helped to make the poem funnier. It's amusing to think of an intergalactic imposter deciding to call himself god and trick a bunch of primitives into worshipping him.

Poet’s Notes on “Burning”:  “Burning” was inspired by Daylight Precision, a play about the bombing campaigns against Germany and Japan during WWII. During the later half of the play, the firebombing of Tokyo takes central stage, and the entire background appears to burn up to represent the conflagration that consumed the then paper-and-wood city. Though my poem is not about the fire bombing of Tokyo, the flames were the direct inspiration for the theme of fire.

The poem is about watching a great, beautiful thing be destroyed.  The devils represent both actual devils but also the savage nihilism that destroyed the beautiful thing (whatever it may be) in the hearts of the arsonists that I imagined set it alight.

The angel represents the cynical wisdom that understands that such is the destiny of all beautiful (and good) things when placed in the wrong hands, and that it is the way of the world for such things to happen. Though his reply is quite laconic, it is pregnant with double meaning, as "is in their nature to burn" both speaks to the devils being inherently destructive, and in the object itself being a transitory thing that will one day meet its destruction. Moreover, he is described as merely watching, which speaks to the incapacity for reason to restrain the passions of the ignorant.

Editor’s Note on “For the Amusement of God”:  This one tells an interesting all too true story about the relationship between gods and men.  There is irony, but it is not overdone.  The dark humor at the end is simply brilliant.  “For the Amusement of God” first appeared in Andromeda Spaceways Inflight Magazine issue #49 and was reprinted in the February 2015 issue of Songs of Eretz Poetry E-zine.

Editor’s Note on “Burning”:  “Burning contains a profound message, sad but true, elegantly stated, with just enough religious overtones to make it speculative/mythological but not enough to make it preachy (a fine line well trodden by the poet).  I enjoy how the use of alliteration and consonance enhances the aural quality, as does ending the first and last lines with "burn."  "Burning" first appeared in the February 2015 issue of Songs of Eretz Poetry E-zine.
Posted by Steven Wittenberg Gordon, MD at 6:42 PM