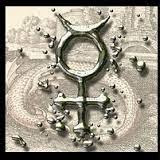 A failure of conversation
Occasioned the need
For a prescription of mercury
Because what should have been conveyed
Was instead frustrated
Something else was communicated
Wordlessly, insidiously
Stealing into the communion
Of two lovers bound once in trust
(They learn too late to cherish what was lost)
(And lost it is indeed)
Yet now a Hermetic cure intrudes
Upon a Venereal concern
And words once more are stifled
Replaced by a burning silence
Searing, seething
Never ceasing
Though so much has ended
(Betrayal is as smouldering coals)
(As a sundering of trust)
Corrupted by the contagion
Of a failure of conversation
Which occasioned the need
For a prescription of mercury
How retrograde

Poet's Notes:  The inspiration for "Mercury Rx" came about through an amusing abbreviation from friend and poetess Gabrielle "Gaby" Kappes, who used it in place of "retrograde" shortly after she came to my first poetry reading for Big Pulp's Kennedy Curse anthology.  Gaby so happens to be heavily into astrology (as well as an English Ph.D. student at CUNY Graduate Center), and in our frequent e-mail correspondence she told me her (then current) bout of melancholy was indicative of either "Mercury Rx," or that she already missed the New England coast where she had spent the weekend.  I immediately was struck with the double meaning of "Rx" as both retrograde and prescription, and told her that I thought it would make a wonderful title to a poem.  I availed myself of a long subway ride up to the Bronx (where I was teaching philosophy that semester) to write the poem the next day.

The poem was easy to write, came readily to mind, and plays with both meanings of the term as in the original idea that sparked it.  As a prescription, Rx represents the cure for the sexually transmitted disease that afflicts the lovers.  From the time of Paracelsus—the usage of "hermetic" directly references Paracelsus' preeminence in alchemy—till the advent of modern antibiotics, mercury was the standard treatment for most STDs.  An old saying went, "a night of Venus and a lifetime of Mercury."  As such, it seemed to me the prescription would be best suited towards such a specific form of infection.

As retrograde, Rx speaks to the frustration of communication that both occasioned and was the result of the communication of the disease.  Someone—I never identify whom—did not tell the other about the malady, and as a consequence the relationship was brutally marred by the introduction of the infection into their union and the betrayal of trust—and perhaps fidelity—that this entailed.  This betrayal causes communication between the pair to become even worse as the lovers retreat from one another, and so are they left to burn both literally and metaphorically in their new silence.

Editor's Note:  The deliciously alliterative passage "Searing, seething / Never ceasing" gives me goosebumps--it sizzles like the fire in the lovers' loins.  I also enjoyed Mr. Rowe's pun on "hermetic" which refers to Hermes, the Greek name for Mercury.  The breakdown in verbal communication that leads to the physical communication of the communicable disease also cleverly evokes Mercury--the messenger of the gods.  "Mercury Rx" first appeared in Songs of Eretz Poetry E-zine Volume 1, Issue 7 (July 2014).
Posted by Steven Wittenberg Gordon, MD at 1:58 PM