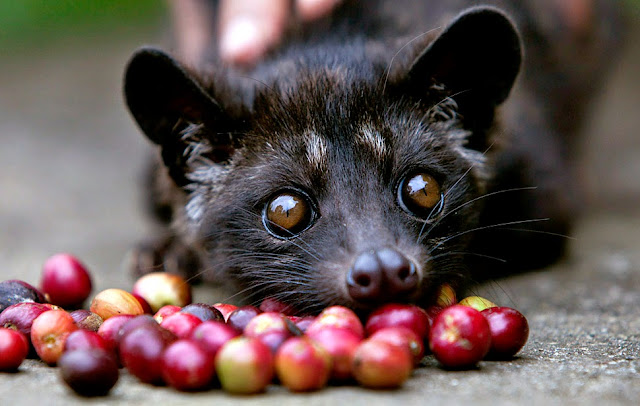 It is not the bird's giant nutcracker beak
that does the necessary damage. The endocarp is still too durable,
too fleshly hard, and so the tambalacoque

seed must be swallowed first, a considerable
feat in itself given the hugeness of the nut (despite the similarities,
this is no rain-swollen, moss-covered, golf

ball lying there on the jungle sward, awaiting
Dutch adventurers to find), but the dodo, having already forsaken flight
to live on Mauritius, is equal to the task.

Down into the avian gullet it goes, down
through the ventriculus, where the tree's hide is assaulted by stones
like some botanic saint or adulteress,

eventually to emerge with a lethal bruise,
a crack or rift in the endocarp, which then allows Nature, via solar
torque, access. The result, in time, will be

a tree. Joyce Kilmer, would you mind joining
Charles Darwin and me in the orchard of beastly mire for tea
Or if not tea, maybe Kopi Luwak

Thanks to the Asian Palm civet,
a fruit-eating, fur-bearing, 10 lb mammal, part cat, part weasel, yet
somehow altogether neither,

that loves to dine on red coffee cherries,
shortly whereafter passage is engaged through the alimentum; no gastroliths reside
here for grinding in the cat-weasel's

gut, but an alchemy of enzymes
that will leach out the bitter proteins, transforming the plumbous bean
into a harder, brittle, and darker quiddity

that will emerge from the retort
of the intestines as shit-covered pellets of gold. Cleansed, roasted, brewed,
the result is Kopi Luwak,

As for my own mutable engine, the plus
ça change of moons and hormones, it continues apace, although I'm still not sure how
or where the raw material has entered me,

or if the implantation has been imposed
from without. Perhaps aliens? All I know for sure is that something definitely tumbles
within, like a gem in a polishing machine,

accreting layers, modifying others,
being either enhanced or broken down by its passage through my interior, whether
the actionable process involves the millstones

of genes, enzymatic reduction, or simple
female magic. Not that, at his stage, it matters. I'm fairly far along, I sense.
And keeping my fingers crossed that all goes well.

I'm also betting my metaphoric cohorts
were less than impressed by the dross they strewed, although I'm resigned
to betterment -- to gold, but without the feculence.

If I'm lucky, no matter how transformed
the original seed, perhaps the end result will even look like me.

Poet’s Notes:  I've always had an interest in one of alchemy's central conceits: namely, that by means arcane or scientific, it's possible to transform either a base or ordinary substance into something extraordinary or precious, lead into gold being the paradigmatic example. Of course, we now know this is technologically undoable, although apparently the process can be reversed, gold being transformable into lead if you add the right number of neutrons and then wait for the appropriate decay processes to take place.

But while elemental alchemy has proved to be a bust, keyed perhaps by an early decision to major in biology once I was of age, it did not take the youthful me long to realize that biological alchemy has been with us in various forms and modes pretty much since the beginning of life. And talk about your base materials! Take civet coffee, for example. It starts out as coffee cherries, but then undergoes a process that is frankly a little disgusting, only to emerge as flavorable gold. (Alas, I've yet to taste my first demitasse). Ditto for seeds of the tambalacoque tree and the dodo gullet.

And so, as someone who is always looking for subjects about which to wax poetical, once I began to link both transformations together in my head, I felt as if I might have the makings for something potentially wonderful and enriching. (Yes, poets are alchemists, too--although our results are often plumbous). But it wasn't actually until I was well into the first draft that I realized there was a third example I could tie into the alchemical process, not only surprising me, but hopefully the reader as he or she peruses the poem for the first time.

Doubtless, to some extent, I was subconsciously influenced by Yeats's line from "Crazy Jane Talks With the Bishop" about where "Love has pitched his mansion," but later, when I attempted to work this into the poem, I couldn't do so satisfactorily.  At any rate, this is how "Strange Alchemies," a poem I originally called "Tambalacoque, Topi Lowak, and Me," came into being.

Editor’s Note:  I was really enjoying the botanical education in the first part of the poem, which Mr. Borski makes all the more vivid and memorable through his storytelling style.  Then I came to the turn where science and science fiction spectacularly collide, and I was blown away.  "Strange Alchemies" was first appeared in the February 2015 issue of Songs of Eretz Poetry E-zine.
Posted by Steven Wittenberg Gordon, MD at 3:31 PM