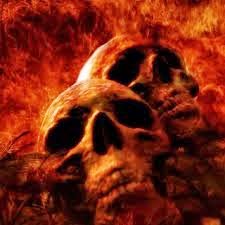 As fire tempers steel
So does suffering temper man
And we, untempered
Have become brittle

Thus, I foresee a day
Far off from now, yet near in time
Where from the hills again
The serpents shall descend

The Monster
Will be an omen
Of the heroless age

Poet's Notes:  This poem (which is among my favourites) began as a pithy bit of wisdom I crafted when I was about fifteen, "(...So) As fire tempers steel / so does suffering temper man."  This saying stood on its own for many years, having been merely a thought that I conceived; it captured something worth preserving, but otherwise not artistically important.

Then came "Everywhere the Serpent Slain."

I do not recall its genesis—what struck me to write this poem in particular, and from what source the inspiration was derived—but the idea is that it the poem serves as a prophetic vision of a time when the world as it stands now will once again face monsters, as it did "once upon a time," but will be found lacking for want of heroes.  Whether these monsters are metaphoric or literal, I leave to the reader.  I use the idea of the monster, however, to draw on the mythic importance of dragon-slaying legends which is found in the triumph of man over chthonic forces as expressive of man's progress and ascendency proven through the courageous act of taking on the beast.

Given that this theme lends itself towards the experience and victory over suffering, the saying I had long ago written was a perfect fit for the poem.  Its inclusion was added early on, while I was still making sure the poem read the way I wanted.

I take this poem as conservative and pessimistic in tone.  We had, in the past, succeeded in great deeds in large part by a willingness to face them. Since that glorious epoch, we have only grown soft and weak for want of being tested as we had been.  We are too much confident that we are masters of all things because of this long peace, and have never had to face the fear of meeting that which makes light of our existence, as the monsters of antiquity were held to do.  As such, I find that we lack heroes, and because of this our fate is sealed when the world changes.  When the monsters come again—whether literally or metaphorically—we shall not prevail, and " We shall / become in that day / As they in our own / Our skulls / Pounded to dust".

This conservative streak derives from my anachronistic sensibilities (I find all this mythic talk utterly romantic) and from a strong belief that mankind's only progress was attaining civilization, and since then we have made virtually none outside of trivial matters such as adding new gadgets.  I would even be willing to say I do not believe in the possibility of further progress, especially as it seems the more we attain, the more meaningless our lives become.  To borrow Nietzschean phrasing, we are heading towards the last man, not the ubermensch.  This broad theme is fairly essential to my writing and poetry in general, mixed more or less with hope depending on the point and mood of my writing in prose or verse.

As for the aesthetics of the poem, I chose such wording and breaks as I thought gave a somber tone and rhythm that reflected the dim view of man's future.  I usually prefer that all stanzas in a poem retain the same size, but I chose instead to have the first and last be of only three lines.  I thought this was important for the thought conveyed, as I did not want to embellish that which could stand on its own as a complete stanza, strict form be damned.

Editor's Note:  Sadly, I believe that Mr. Rowe's poem is eerily prophetic.  Sadder still, the "monsters" we will face will have no face--they will not be dragons that, while terrible, are easily identifiable.  No.  I fear that the monsters we will face will be the seductive elixir of liberalism, the erosion of personal freedom, the intrusion of central government, and the eventual suppression of poems such as this one (and the poets who write them).  "Everywhere the Serpent Slain" first appeared in issue #11 of Heroic Fantasy Quarterly and was reprinted in Songs of Eretz Poetry E-zine Volume 1, Issue 7 (July 2014)..
Posted by Steven Wittenberg Gordon, MD at 1:58 PM