"The Crane-Pygmy War" by Robert Borski

"The clamor of cranes goes high to the heavens, when the cranes escape the winter time and the rains unceasing and clamorously wing their way to streaming Ocean, bringing the Pygmy men bloodshed and destruction." Homer, Iliad 3.3

We keep sharp eyes to the sky, post sentinels
in the marsh, where pink-gilled fish
swim in ever slower circles. If the birds dine here,
either before or after, their gullets will
flash and shiver with river poison.

The day is bright, with no clouds
to hide their approach.
Our spears dance with light. Uninvaded,
the swamp continues to twitter and tweep,
its beast chorus on alert.
Like us, when the blood runs free, they will
dine on war porridge
thickened with sweet viscera.
On the morrow, they will help us
boil the yellow unborn and make jokes
to scare away feathered ghosts Any war where you can eat the spoils
claim the elders, is not altogether bad.
Though little in size, we have big appetites.

We keep sharp eyes to the ground.
We see the lazy fish, but fear the pinprick of arrows.
Below, undistanced, their spears wink like beads of starlight
and we hear their crepitating fear.
The long ancestral flight from Æthiop is nearly over.
Soon, their dead will yield up
the cracked skull-meat we will eat in victory, and we
will mate like eagles.
Then in a final storm of wings
we will take to the sky and evacuate
our bowels, fouling their huts of wattle
and reeds with black rain.

Though creatures of air and spirit, we are
not above small acts of desecration.

Besieged by the sharp-beaked birds
we fight like small giants -- even
our children partake in the conflict,
running in to slash
at the brown stalks of their legs
with opalescent shards of clam.
Now there are one-legged
cranes everywhere, hopping
about like a contagion
of tall fluttering white toads.

Soon enough the mud is stained
with blood, replicating the First Womb,
but no new progeny

of little people pours forth
to help with the battle. Today, it seems,
we fight not for the past, but our future,
and the dreams of our grandchildren's
grandchildren.

All through the long afternoon,
our throats continue to make rallying
cries of war, but our hearts
are sore from seeing
so many of our friends and families
lying face-down in the water
like broken lilies.

For little people they have
sizeable amounts of courage,
but it is still not enough to defeat
the feathered sons and daughters of Oinöe,
their former queen.

All through the campaign we dance
in and out of their ranks, 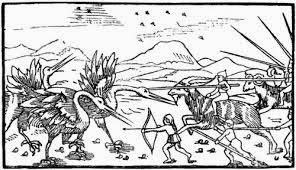 darting like our brothers, the kraits,
skewering the dark-limbed morsels
while they still pulse with life,
then swallowing them like frogs.

Though the opal talons of their children
continue to menace, we are
used to standing at the water's
edge, fishing on single legs
just as many shattered Styx-bound
veterans learn to do.

Our bloody wings are not stigmata.
Maimed or not, we remain soldiers.

At the end of the day
only one of each tribe is left to parley
concessions.

Acknowledge defeat and you will
yet live, says the crane
with its scissors-bill.

You should die of shame
with words like that in your mouth,
responds the little man. I will
fight for my people until the moon
falls out of the sky.

Both are more tired than they 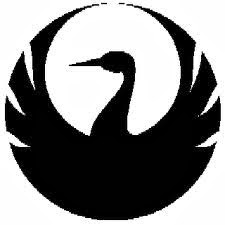 care to admit, even to their secret
warrior selves, while
all about them ruby ghosts
are beginning to congeal
in the night air like fog,
eager to rejoin the fray,
if with nothing other than shrieks
and hair-pulls of encouragement.

But which is more stubborn, pygmy or crane?
Who will set aside his enmity
for one last chance at truce?

Only the watching moon ever learns, not we.

Poet’s Notes:  In every poem I write, I try and do my best to come up with at least one or two turns of phrase that I hope will make the reader smile or gasp:  a well-crafted simile or beautiful metaphor; a series of fantastical, horrific, or SFnal images; whatever--as long as the words that wind up on the page are fresh and original. Thus my overall intent with "The Crane-Pygmy War." To take a relatively minor event from Greek Mythology (which I've loved ever since 1958 when the movie Hercules starring Steve Reeves came out) and to endow it with as much heightened language as possible and make it sing.

No, it's not Homer; but I do hope when you read it you can hear and see the fluttering of wings and brave defense of little men as pygmy and crane engage each other in a battle for their lives.

Editor’s Note:  I particularly enjoy the epic, Homerian style and themes as well as the back-and-forth shifts in perspective between one party and the other.  The poem feels like a tantalizing fragment of a larger work from a lost translation of Ovid.  "The Crane-Pygmy War" first appeared in the April 2014 issue of Songs of Eretz Poetry E-zine.
Posted by Steven Wittenberg Gordon, MD at 3:31 PM