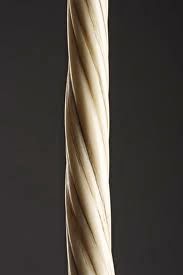 Not quite narwhalian,
the whorled point is rounded
off, then the rest of it ground
down to a size that can be
grasped with two hands,
but dare not dismount her,
unlike its formerly maned owner--
an ivory pommel the lady
will use for pleasure when
riding herself.

The rest of the horse
(how dare he bridle at her
encircling legs, as if she were
some mere trollop!)
she has made into glue
and a snow-colored throw
that will keep her warm
as she gallops through
red vales of ecstasy.

Poet’s Notes:  It's not that I don't like horned things. I have at varying times in my life been extremely interested in ceratopsian dinosaurs, rhinoceri, and one eyed, one horned, flying purple people eaters.*  It's just that unicorns are emblematic of purity and can, like the equine equivalent of touchstones, detect the lack thereof in those of us who are less clean than angels. So it wasn't really that difficult imagining what sort of person would hate a unicorn and what she might do to take vengeance on said beast if she had the power and resources.

*Just for the record I'm talking here about the 1958 novelty song, "The Purple People Eater," by Sheb Wooley, not any of my ex-wives.

Editor’s Note:  “Tusk,” with its grotesque imagery, over-the-top description of cruelty, and adult sexual content just may be the sickest thing I have ever read--and I’ve read the complete works of the Marquis de Sade.  However, the language is so exquisite, and the build up to the (ahem) climax so adroitly executed, that the poem remains high art and not pornography.  "Tusk" first appeared in the April 2014 issue of Songs of Eretz Poetry E-zine.
Posted by Steven Wittenberg Gordon, MD at 3:31 PM