Review of "On Disappearing" by Major Jackson 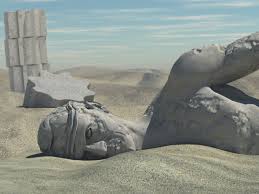 "On Disappearing" by Major Jackson was offered by Poets.org's Poem-A-Day on September 11, 2013.    Musings on the past, present, and future meld in this prosaic poem that expresses the universal yearning for permanence in an impermanent world.  "I have not disappeared" opens the poem and acts as a refrain, or perhaps mantra, repeated as though doing so would change that which cannot be changed, for we all ultimately do disappear.  I believe one of my favorite poets, Percy Bysshe Shelley, captured this inevitability best in his poem, Ozymandias:

I met a traveller from an antique land
Who said: `Two vast and trunkless legs of stone
Stand in the desert. Near them, on the sand,
Half sunk, a shattered visage lies, whose frown,
And wrinkled lip, and sneer of cold command,
Tell that its sculptor well those passions read
Which yet survive, stamped on these lifeless things,
The hand that mocked them and the heart that fed.
And on the pedestal these words appear --
"My name is Ozymandias, king of kings:
Look on my works, ye Mighty, and despair!"
Nothing beside remains. Round the decay
Of that colossal wreck, boundless and bare
The lone and level sands stretch far away.