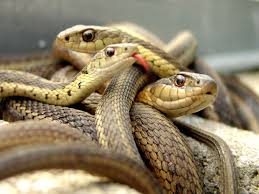 "Snake Sister" by Melissa Mead appeared in Daily Science Fiction on April 10, 2013 as the next installment in its ever-other-Wednesday faerie tale series.  "A young maiden attracts the attention of a prince after she is 'rewarded' by a sorceress with the temporary ability to produce gems every time she opens her mouth; her sister is 'cursed' with spitting up frogs and snakes."  Numerous stories by the same author have appeared in DSF and been reviewed in Songs of Eretz.

The story evokes the scene in one of the Harry Potter movies when Ron accidentally curses himself with his broken wand and winds up vomiting slugs.  Throw in a little curse of King Midas for the gem spitting sister.  The ending does not seem to connect to the rest of the tale, and I do not understand how the POV character could talk and spit snakes at the same time.  3 out of 7 rocket-dragons.
Posted by Steven Wittenberg Gordon, MD at 8:07 PM