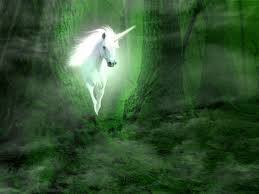 "Chasing Unicorns" by Terra LeMay appeared in Daily Science Fiction on April 26, 2013.  "An innocent young man is initiated into a band of poachers who kill unicorns in order to harvest their valuable horns."  The editors warn that the story is "not for the faint of heart," but I've read more disturbing stuff.

The reader is bombarded by the introduction of no less than six characters (possibly more, I'm still not sure) right at the outset.  There then ensues a tedious bit about powdering horn and dividing it into one gram packages.  The horn is supposed to detoxify poisons, but perhaps it is used like crystal meth.  The unicorns are supposed to be pure and holy, but act almost demonic when cornered.  I finished the story in a state of confusion.  Still, I do like unicorns, which probably added at least a rocket-dragon to the grade of 3 out of 7 for this one.
Posted by Steven Wittenberg Gordon, MD at 7:09 PM