The Twelve Days of Christmoose by the Editor, Part 10 of 12

“I am not worried,” Adirondack said.
“You’ll think of something, I have not a doubt.
There is no problem too big for your head.
The power of your brain will have me out.” 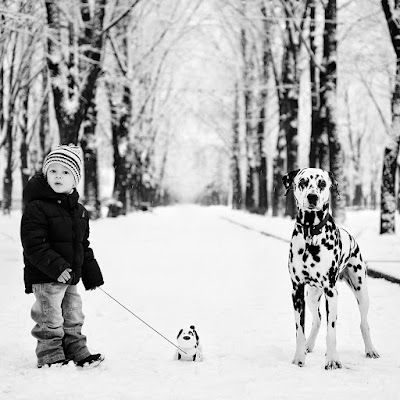 The trusting moose then gazed up at his chum
Who for his friend’s sake tried not to look glum.

Then just as Atay was about to stare
Up at the sky so his friend would not see
His face awash with the most grave despair
For his poor pal entrappéd near the tree,
He heard the sound arise from o’er the dells
Of the jing-jing-a-ling of sleighing bells.

“Oh, hark!  Hear you that sound?” asked ape of moose.
“I do indeed, oh most sagacious one.
It is the sound that sleigh bells do produce.
No other ring is like it ‘neath the sun.”
‘Twas not long ‘fore Atay saw the sound’s source:
‘Twas Jason ‘pon his shining sleigh, of course!

The sleigh was being pulled by Jason’s dogs,
Abone and Pidget they are called by name.
Abone, a book-smart mutt, sings as he jogs,
And Pidget, a Dalmatian, does the same.
“Tra-la-la-woof!” sang out the canine pair
As Jason’s voice did carry through the air.

Editor's Note:  It appears reinforcements have arrived!  Is Adirondack saved?  Find out in tomorrow's edition of Songs of Eretz Poetry Review!

Posted by Steven Wittenberg Gordon, MD at 11:04 AM