The Twelfth Day of Christmoose by the Editor, Part 12 of 12

“What is the plan?” asked Pidget with a bark.
“Yes, what have you in mind?” too asked the boy.
“‘Tis simple, folks,” Atay said with a spark. 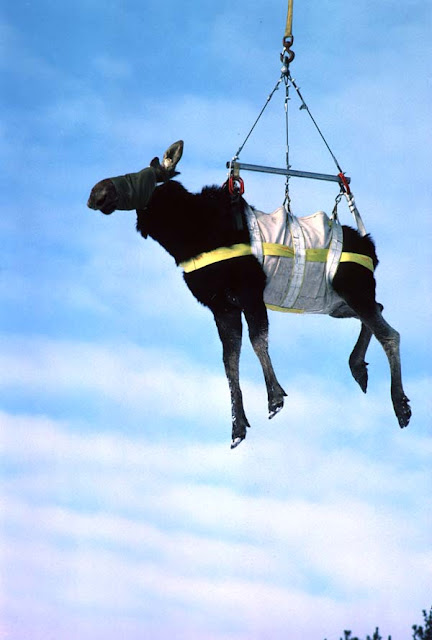 “That tree limb over there we shall employ
As a great fulcrum for a pulley rope,
And with its aid the moose bring up the slope.”

With that, the rescue team began to act
To carry out the plan of Atay’s wit.
The harness ropes and blanket Jason packed
Made a stout sling.  Once lowered in the pit
The sling was slung beneath the helpless moose,
The rope upon the tree limb hanging loose.

Above, Atay and Jason grabbed the rope
And pulled with all the power they could bear.
Then slowly our good moose came o’er the slope
Suspended from the sling in the mid-air.
Soon to the rise the merry moose did sail
Whilst silly Pidget barked and chased his tail.

They set the moose most gently on the sleigh,
And what a happy, grateful moose was he!
He thanked them all, especially Atay,
Awhile the crew danced in the snow with glee.
“Let’s to my home now pull our antlered friend
And bring this great adventure to an end.”

So dogs and boy and ape the sleigh did tow
Out of the orchard towards Atay’s abode.
‘Twas not an easy task in all the snow
And tired were they when they reached the road
That led them at long last to Atay’s door.
But ‘cause they loved their friend, ‘twas not a chore.

Once in the cabin the good friends did go,
A fire took the cold chill off of their bones.
Then all relaxed and laughed about the snow
While sipping choc’late hot and nibbling scones.
And thus the best of friends did pass the day
Within the dwelling place of good Atay.

Editor's Note:  I hope this "Twelve Days of Christmoose" series has extended at least some of the spirit of Christmas beyond Christmas Day and into the New Year.  And, just as Milne did for his stories, I hope that someday in the not too distant future, my son and daughter may read these stories to my grandchildren and remember with fondness their sentimental old dad.

Posted by Steven Wittenberg Gordon, MD at 10:57 AM