"He Loved to Play" by Lauren McBride, Frequent Contributor

He Loved to Play
Lauren McBride

His hands lay drumming on stiff white sheets.
Not drumming, she realized when she arrived
at his bedside, breathless and rushed.

"We had to restrain him," the orderly was saying.
"His tap-tapping was bothering the other patients."
"I came as soon as I heard," she protested, watching his hands. 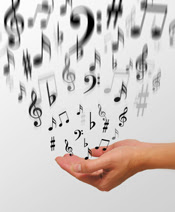 Grabbing one hand, she kissed his brow.
He smiled, fingers flying.

"Release him," she commanded, and fixed fierce eyes
on the orderly until he obeyed.
Then she took both hands in hers and counted -

123, 123 A waltz danced from his fingers
across her palms. Music he loved to play
before sickness came and slowly erased his mind.

He was gone,
leaving her memories -
and music clutched in her hands.

Poet’s Notes:  When I saw a prompt to write about music and math, I was intrigued. From my years in band, I knew that music and math go hand and hand. So what to write? Since music speaks so intimately to the soul, I invented a story about someone who has only his music left.
Posted by Steven Wittenberg Gordon, MD at 11:51 AM