The Twelve Days of Christmoose by the Editor, Part 8 of 12

“Egad!” exclaimed he as he lit a lamp.
“To Adirondack’s swiftly I must go! 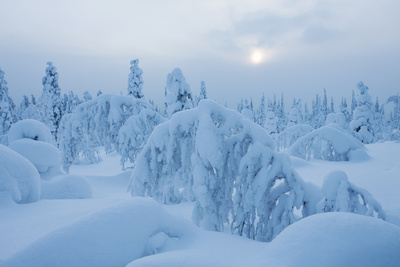 With snowshoes ‘pon this I may safely tramp,
But, sadly, for my hooféd friend—not so.
Unless he’s done as I once taught him right
I fear he may have perished in the night.”

And so, our stalwart ape went to his door,
That of a fortune opened in, not out,
And with a shovel that he had in store
To right and left he pushed the snow about
Until at last he saw the light of day
And using snowshoes soon was on his way.

For his good friend our hero feared the worst
As o’er the snow he lumbered at a pace.
The apple grove he’d search for his friend first,
For there the moose had made his dwelling place.
While worst he feared, ‘twas for the best he hoped
As o’er the snowy drifts he quickly loped.

At last, our Atay to the grove arrived,
His body steaming from his snowy spin.
His hope for his good friend, the moose, survived
Until he saw the state the grove was in,
For just the tops of trees were in his sight,
And some trees, he observed, were buried quite.

Editor's Note:  Did Adirondack the Moose survive the storm?  Find out in tomorrow's edition of Songs of Eretz Poetry Review!