Review of The Left Hand of Darkness by Ursula K. Le Guin 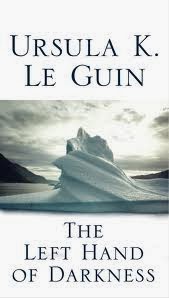 The Left Hand of Darkness, part of the Hainish Cycle of novels by Ursula K. Le Guin, was published in 1969 by the Penguin Group with an introduction by the author added in 1976.  The novel received both the Hugo and Nebula awards in 1970, a feat Le Guin repeated in 1975 with her novel The Dispossessed, becoming the first ever to win both awards for novels twice.

The novel is set on the distant planet Gethen, also known as Winter due to its harsh, Ice Age climate.  The plot revolves around Genly Ai, a human envoy from a loose federation of planets tasked with making first contact with the Gethenians.

The people of Gethen are “ambisexual.”  For about three weeks a month they are phenotypically genderless or androgynous.  The remaining days of the month they transform into a hypersexual state called kemmer, which is similar to the estrus cycle of lower primates.  The Gethenians pair up during kemmer and are excused from all other obligations during this period.  One of the pair randomly transforms into a “female,” and the other into a “male.”  The two then mate, and the “female” bears the offspring.

The ambisexuality of the people of Gethen results in several interesting social and societal phenomena.  Sexual frustration is rare, as the state of kemmer occurs simultaneously in enough Gethenians to allow for ample and indiscriminate pairings.  Rape and prostitution do not exist.

There are no wars--ever.  The Gethenians do not even have a word for “war.”  Even violent crime is rare.

Infants remain with their “mothers” only for the first year of life.  Thereafter, they live in public schools and are cared for and educated communally.

Since there are no defined gender roles, there are no differing career expectations based on gender.  Sexual discrimination, by definition, does not exist.  Any Gethenian can, theoretically, grow up to be whatever he/she/it wants to be.  Even parentage counts for nothing, as all Gethenian children are essentially on equal footing in the communal schools.

I wonder how many feminists and liberals would like to see the human race socially or, worse, genetically, engineered into something Gethenian?  In effect, the Gethenians do represent the liberal feminist ideal.  However, they do so only at the cost of the complete loss of masculinity and femininity.  Personally, I would find such a loss chilling--as frigid as Winter.
Posted by Steven Wittenberg Gordon, MD at 10:46 AM