"Beasts" by Carmen Giménez Smith, a teacher at New Mexico State University, was offered by Poets.org's Poem-A-Day on December 12, 2013.  A link to the poem, including the poet's notes, may be found here: 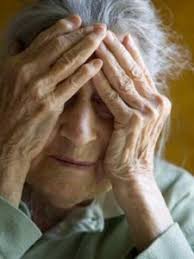 The poem is presented in sixteen couplets of uneven free verse.  The first person singular in the poem is the poet.  This is a deeply personal poem about her mother who suffers from Alzheimer's Disease.  However, as this disease affects so many people directly or indirectly, the poem has a universal quality.