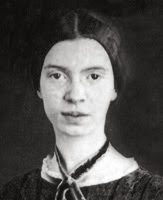 "It's all I have to bring today" by Emily Dickinson was offered by Poets.org's Poem-A-Day on December 31, 2013.  A link to the poem may be found here:

Emily Dickinson (1830 - 1886) (pictured) is considered by scholars to have given a unique voice to American poetry.  The same is said of Walt Whitman, a contemporary whom Dickinson found scandalous and therefore did not read.  Emily and her younger sister Lavinia lived their entire lives in a house in Amherst, Massachusetts.  The two spinsters rarely left the house.  Upon Dickinson's death, a collection of nearly 1,800 of her hand-written poems was discovered and published posthumously in 1890.  Additional details of the biography of this reclusive but important poet may be found here:

Dickinson is known for using pronouns, particularly the word "this," without clear reference, and she does not disappoint in "It's all I have to bring today."  The title is taken from the first line of this rhythmic, rhyming poem of eight lines.  The pronoun "it" of "It's" has no clear reference either.  One may assume, probably, that "I" and "my" refer to the poet.

Dickinson is also known for the enigmatic use of dashes.  Some editors have replaced her dashes with other punctuation, but purists leave them intact although their meaning is not clear.  The dashes are preserved in Poet.org's presentation.

The sixth line is particularly interesting, with its play on "some" and "sum" and "one."


Some one the sum could tell--

"One" could mean that the sum totals one.  "One" might also mean "he/she."

The phrase, "This, and my heart" opens three of the lines in this eight-line poem and therefore must be significant.  While it is unclear what "this" is, the reference to "my heart" may indicate that Dickinson was heartsick, heartbroken, in love, or lonely when she penned these lines.

Posted by Steven Wittenberg Gordon, MD at 8:37 AM