"Happy first anniversary (in anticipation of your thirty ninth)" by Bob Hicok was offered by Poets.org's Poem-A-Day on December 13, 2013.  A link to the poem, including the poet's notes, may be found here:

Bob Hicok (b. 1960) is an Associate Professor of English at Virginia Tech.  A brief biography including his publication credits and awards may be found here: 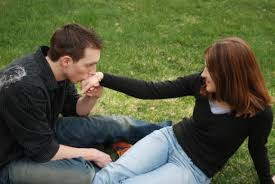 The poem is presented in a rambling yet rhythmic free verse whose lines are of fairly even length in size and feet.  The first line declares the first person singular, presumably the poet, to be "an important person," at least to feeder birds--a humorous opening.  The poet contrasts the newness of those anticipating their first anniversary with the "sagging" of those anticipating their thirty ninth.  The relatively newlyweds look with a jealous eye at the familiarity of the old married couple.  The older couple looks with jealousy at their younger counterparts for whom everything is a "first" and for whom everything holds the excitement of discovery.
Posted by Steven Wittenberg Gordon, MD at 3:34 PM