"Mountain Pines" by Robinson Jeffers was offered by Poets.org's Poem-A-Day on December 28, 2013.  A link to the poem may be found here:

Robinson Jeffers (1887 - 1962) (pictured) was a highly regarded and influential American poet known also for his leadership in the environmental movement.  He was the father of inhumanism, a philosophy that proposed that mankind had grown jaded and indifferent to the beauty of nature.  He was considered a controversial figure during the 1930s and 1940s over his admiration of Nietzsche's individualism.  He lived most of his life in a humble house of stone that he built in Carmel, California, a setting that influenced much of his poetry.  Additional biographical information about this poet may be found here: 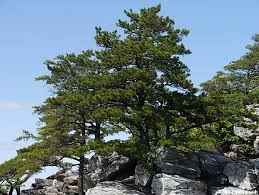 "Mountain Pines" is in the form of a modified Shakespearean sonnet, lacking only the final heroic couplet.  It describes rugged mountain pines, from their gnarled roots to their twisted boughs reaching for eagles and clouds.  The trees are otherwise lonely sentinels, watching the sky.
Posted by Steven Wittenberg Gordon, MD at 7:12 PM