"Pluto" by Lauren McBride, Poet of the Week 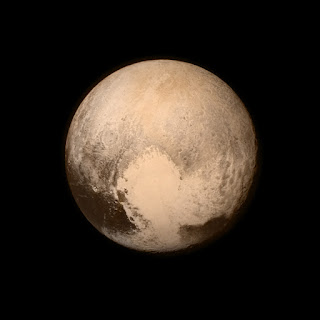 Poet's Notes: After nearly ten years and three billion miles, the New Horizon's probe was speeding so fast it had only nine minutes to take pictures of Pluto.

Those images resolved a fuzzy blob into "the other red planet:" a world that was not cratered like the moon or Mercury, not cloudy like Titan and Venus nor striped in swirls like Jupiter and Saturn, but uniquely Pluto with a large heart shape dominating its terrain. Planet or dwarf planet aside, Pluto has captured our hearts with its heart.

Editor’s Note:  Those interested in finding out more about the New Horizon’s mission to Pluto would do well to follow this link https://www.youtube.com/playlist?list=PLiuUQ9asub3RUlLBXMFGq8aFEPS5yONT2.

Posted by Steven Wittenberg Gordon, MD at 11:59 AM