Editor's Note:  Toward the end of every year, Songs of Eretz must bid farewell to Frequent Contributors who have decided to move on to other projects.  Sadly, this year we must say goodbye to Mary Soon Lee, a charter member of the Frequent Contributor group who has been with us since January 1, 2016.  Her simple, enjoyable, often speculative style added a bit of spice to Songs of Eretz that will be dearly missed.

As a final tribute to this up-and-coming poet, Songs of Eretz will feature Mary as our Poet of the Week for the week of December 3, 2018.  We invite you to enjoy one of Mary’s poems every weekday this week, beginning today with "Félicette...". 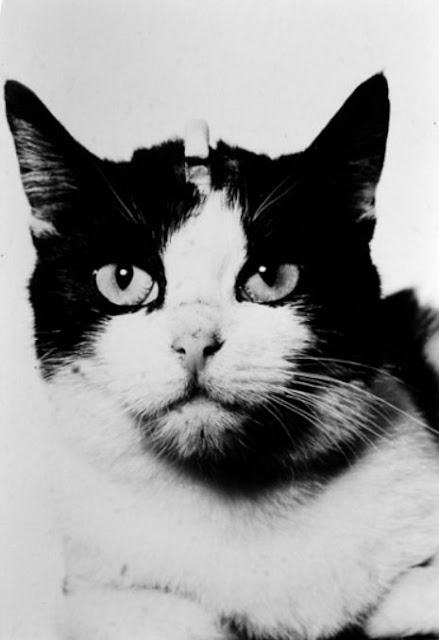 Her fifteen-minute flight
a French footnote
in the race to space.

A stray street cat, Parisian,
conscripted, strapped in place,
streaking through the stratosphere.

No interviews,
no ticker tape parade
on her safe homecoming.

Poet's Notes:  I wrote this poem while I was working on a sequence of cat poems. The preceding poems were about imaginary cats: time-traveling cats, magical Camelot cats, cats within mirrors. Then F. J. Bergmann (ed note: whose contributions to Songs of Eretz may be enjoyed here http://www.songsoferetz.com/search?q=Bergmann) sent a link to an article about  Félicette https://hyperallergic.com/407954/crowdfunding-a-memorial-to-felicette-the-first-cat-astronaut/, who was a real cat (pictured), the first cat to be sent into space. I found the scanty information about  Félicette poignant and wrote this poem the next day.

Posted by Steven Wittenberg Gordon, MD at 11:34 AM