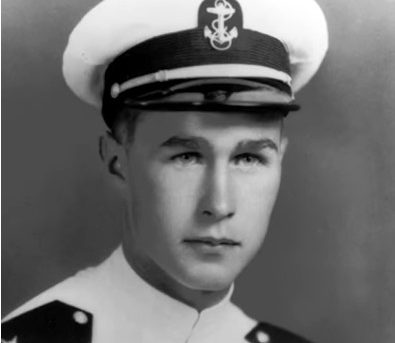 His detractors called him a wimp
confusing his quiet humility for indecisiveness.
Born into wealth and privilege
he could have opted for a lazy life of luxury.
Instead he chose to serve.

At eighteen he volunteered
for military service during World War II.
At nineteen he became
the youngest fighter pilot in US Navy history.

He returned from war a decorated hero
and married his high school sweetheart.
He and his “Barbara Pierce of Rye”
would remain married for over seventy years.

Forging out on his own,
he became a Texas Oil Man.
He then returned to service:

But of all his titles
the ones he valued most were
“husband, father, grandfather, and friend.”

During his tenure as President
The Cold War ended
The Berlin Wall crumbled
Communism died
And the Era of the Dictator
Came crashing down.

Later in “retirement”
embracing his former rival
he and Bill would travel the world
spreading awareness for humanitarian causes.

Even his former enemies and rivals
had this to say about him:

The fond memory of George Bush Sr. will forever remain in my heart and in the hearts of my countrymen. --Vladimir Putin

His administration was marked by grace, civility, and social conscience. --Jimmy Carter

President George H. W. Bush served our nation with extraordinary integrity and grace.
I remember him for his personal kindness and for his love of this country. --Al Gore

I am grateful for every minute I spent with him and will always hold our friendship as one of my life’s greatest gifts. --Bill Clinton

America has lost a patriot and humble servant in George Herbert Walker Bush.
While our hearts are heavy today, they are also filled with gratitude. --Barack Obama

Rest in peace, Mr. Bush--in the peace you were instrumental in creating.
"Fair winds and following seas, shipmate.  We have the watch."