Songs of Eretz Poetry Review is pleased to introduce Alessio Zanelli to the readership as a new Frequent Contributor and Poet of the Week.  His bio may be found on the “Our Staff” page.

You—who even since the early days
had curbed the vehemence of clouds,
the darkest as well as the brightest,
and conquered the fear of mounting them—

when the evening was growing ripe
and you had reached the end of the line,
well beyond the point of no return,

as soon as you—aghast at your image
returned by the clearest and bluest sky—
could glimpse the ridge of the night,

were blindsided by your primal self
halfway within the twilight’s jaws,
petrified in front of your pristine look
and stunned by the wheeze of the past.

So aged light repelled infant darkness,
backwards past the breach of fractured life
you had hardly managed to keep together.

Your instinctive squeal of old,
as high as the imminent squall,
was echoing through the billows,

raising vortexes of sedate rage
that broke against the jet of passion.
Once again the vapor giants were quelled,
their majestic shapes reduced to human scale.

The following dawn just aglow,
your adamant spirit rode and drove
the most beautiful Morning Glory ever away. 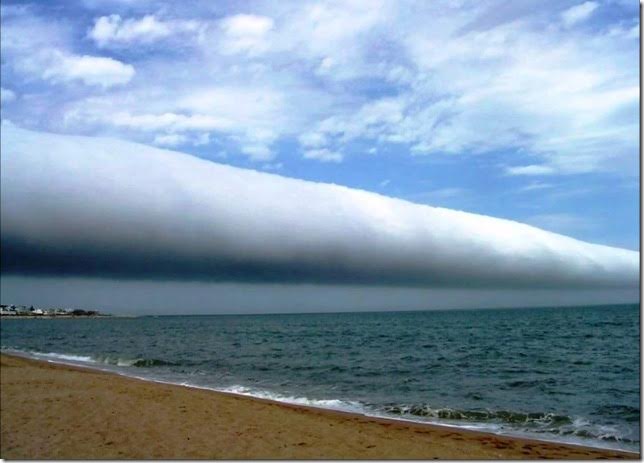 Poet’s Notes: This poem is about an old friend of mine, so big in both stature and soul, who seemed to have so long a distance to cover ahead of him but was forced to stop way too soon... Metaphor and parallels between weather events and human affairs are quite common in my poems. “Morning Glory” is the name of a particularly rare kind of roll cloud (pictured), which can extend for up to 1,000 km!
Posted by Steven Wittenberg Gordon, MD at 1:21 PM