Dr. Gordon is the Featured Poet in the November 2013 Print Edition of Scifaikuest

The following poems, twenty-one in all, by Steven Wittenberg Gordon, MD, the editor of Songs of Eretz, may be found in the November 2013 print edition of Scifaikuest in which Dr. Gordon is the featured poet: 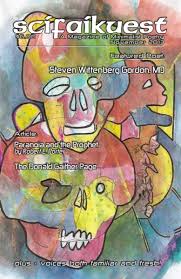 The presentation is marred slightly by the inclusion of by earthlight's warm glow, coming and going, and last scotch on the rocks in the tanka section, and by the inclusion of phoenix feathers as part of the linked, rhyming haiku of Galilean Moons (which was originally composed as a four-poem set including haiku about the other two Galilean moons, Europa and Callisto).

Also included in the issue are an interview with and bio of Dr. Gordon.  Individual copies of the print edition are available for purchase at http://store.albanlake.com/product/scifaikuest-issue-42/ for six dollars.  A one-year subscription to the quarterly magazine is available for twenty-four dollars.
Posted by Steven Wittenberg Gordon, MD at 11:12 PM