Review of "I Heard You Got a Cat, I Heard You Named Him Charles" by M. Bennardo 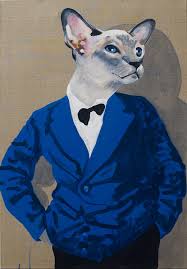 "I Heard You Got a Cat, I Heard You Named Him Charles" by M. Bennardo appeared in Daily Science Fiction on February 20, 2013.  "A shape shifter goes on and on and on about all the things he could be for you."

"I Heard You Got a Cat..." reminded me way too much of "When She Is Empty" by Damien Walters, which appeared in DSF and was reviewed in Songs of Eretz on December 28, 2012.  Perhaps for that reason, I found that "Cat" did not engage my attention as much as I would have liked.  Still, it is a well-written piece with no discernible flaws.  4 out of 7 rocket-dragons.