Review of Crime and Punishment by Fyodor Dostoyevsky 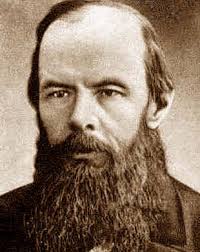 Crime and Punishment by Fyodor Dostoevsky (b. 1821) was first published in Russian in 1866.  I had the dubious pleasure of re-reading it, this time from the translation published in 2007 by Barnes & Nobel Classics with new introduction.  My son had to read it for his AP English class.  I remembered struggling through it in my AP English class thirty years ago.

The impoverished, monomaniacal, perennial student Raskolnikov, internally struggles with the question of whether or not he is an ordinary man or a Nietzschean superman or ubermensch.  In order to prove who or what he is one way or the other, he decides to undertake the murder of a misery old pawnbroker.  According to his philosophy, if he gets away with the murder, profits by it, and suffers no pangs of conscience from it, then he is an ubermensch.  Otherwise, he's just an ordinary, worthless peasant.  He winds up murdering not only the odious pawnbroker but her perfectly nice and innocent daughter as well.  He is surrounded by family and dear friends who he continually insults, excusing his outrageously rude behavior as the product of a combination of mental and physical illness.

I found it difficult to root for Raskolnikov.  He is such a jerk and did not receive nearly the punishment in the end that he truly deserved.  It is apparent that Dostoevsky meant his story to be about forgiveness and redemption, but I found it to be more about the philosophical claptrap of his day.  I struggled to understand what all the fuss was about when I was seventeen.  I guess I still don't understand.
Posted by Steven Wittenberg Gordon, MD at 5:37 PM