Review of "Crabapple" by Lavie Tidhar 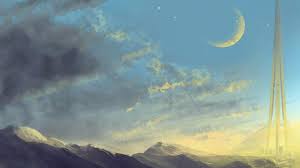 "Crabapple" by Lavie Tidhar appeared in Daily Science Fiction on February 22, 2013.  "A young man finds love in a future filled with the Conversation of nodal implants, designer drugs, and rampant, wanton sensualism."  The editors warn of adult sexual themes and language--take heed.

According to the author bio, Mr. Tidhar is rather famous in science fiction circles, having garnered numerous awards and accolades for his work.  Works of his that have previously appeared in DSF and were reviewed in Songs of Eretz include:  The Book of Qat (serialized in DSF from July 23 - July 27, 2012 and reviewed in Songs of Eretz on July 29, 2012), and "Seashells" (December 7, 2012).

Mr. Tidhar has a beautiful, but unusual, writing style that I found difficult to follow at times.  His setting is particularly unique, connecting the ancient city of Tel Aviv with all its culture and charm to a future version so alien as to be almost unrecognizable.

"Crabapple" reads more like a poem than a short story.  It is filled with imaginative, strange, alien imagery that evokes a host of emotional responses in the reader:  confusion, revulsion, fascination, sadness, and wonder.  The plot, if there is one--the story is more of a slice of life--jumps back and forth between:  the stories of various POV characters, dreams, real reality, drug-induced "reality," the past, and the present (which is really the future).  5 out of 7 rocket-dragons.
Posted by Steven Wittenberg Gordon, MD at 4:26 PM