"Hesitance At Camlann" by Alessio Zanelli 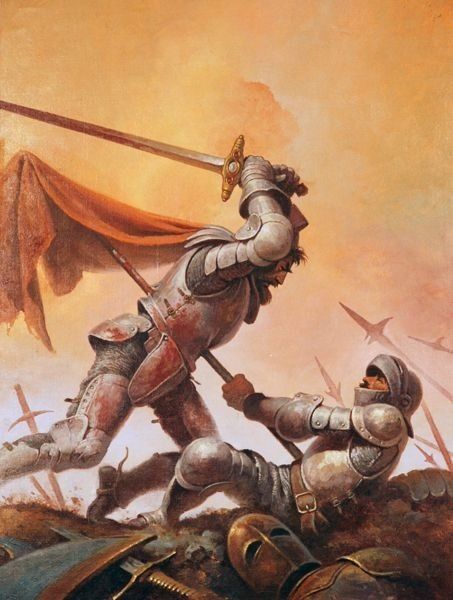 Blunt is the edge,
Pointless – the blade,
Aeruginous – the hilt.
Vanished – the brilliance
Of the steel forged
By sage and benign hands,
When time was puling
Inside the cradle.
Dissolved – the glitter
And the fury of the eyes,
Exhausted – the vigil
For the crunch, that be
With nobody but ourselves.
We like to believe
That outside in the mist
Mordred’s dusky ranks
Eagerly await us.
The combat is lost
Even sooner than fought,
Should we not admit
That our only sacrilege
Was but that of sticking
To our enemy’s figment,
Of reputing ourselves undying
In our deeds’ recollection,
And of disowning in the end
Our ordinary caducity.
A long time we will wait
For a chief who does exist
But within the powdery coffer
Of our time-worn vagaries.
Our aimless arms and banners
Will taint and crumble
To imperceptible dust.
Our certainties will fade away
Like shadows at nightfall.
We will be left alone
With our extinct, sterile ardor.
Mordred and his evil troops
Will have been awaiting in vain.

Poet's Notes:  According to Annales Cambriae and later chronicles, at Camlann (an uncertain place somewhere in England, maybe today’s Queen Camel in Somerset) King Arthur allegedly fought his last battle, against the troops led by his treacherous son of incest Mordred, during which they wounded each other mortally. I’ve always regarded the Arthurian Saga as a monumental allegory not only of the struggle between good and evil but of human existence in its entirety. In turn, I took inspiration from this momentous episode, Arthur’s final epic deed, using it as a metaphor for our continued struggle against doubt and fear, and for our endless battle against imaginary or unidentified enemies. So many times we think we’re fighting something real, be it opposing people or adverse circumstances, only to discover little by little that we’re just chasing ghosts, and that if enemies actually exist, they often hide inside ourselves.

Editor’s Note:  This one reminds me of one James Rowe penned in 2014, "Everywhere the Serpent Slain" http://www.songsoferetz.com/2015/06/everywhere-serpent-slain-by-james.html, one of the best and most important poems I have ever read.  The United States are facing this challenge right now, starring Donald Trump as the faithful, fearless, but tainted King Arthur with the faded Declaration of Independence as his shield and the tattered Constitution as his sword, versus progressivism--the Constitution’s incestuous love child.
Posted by Steven Wittenberg Gordon, MD at 3:48 PM