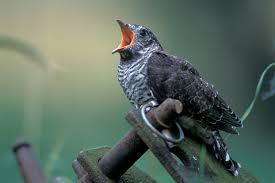 A child, I used to say my prayers.
To whom, I still have to understand.
One day the cuckoo showed and started singing,
I took to keeping silent, listening rather than imploring.
Only—caged in solitude, in awe of myself, obsessed with Lethe,
always looking for bodies of water, as if dying of some unspeakable thirst,
and for winged creatures, as if wanting to mingle with them in flight.

They kept on telling me that God created time before all things,
yet I preferred to swim against the tide and turn to science,
whereby our mind and time derive existence from each other.
The universe alone exists per se and is—as such—unknowable.
Then the cuckoo's cooing ceased, I felt the urge to find some other bird to listen to.
The hawk appeared—I watched it land and soar but couldn't hear its call.
Still desperate for water.

Years succeeded, seasons changed, and so did attitudes.
Till time and aging didn't mean a thing, nor did the birds I chanced upon—no more.
I stopped believing this or that and paying heed to scientists, thinkers, wise and holy men.
If infinite, I realized we are allowed to gather but a tiny speck of time,
too small to waste or give away, indeed so small as to make me regret the birds,
the cuckoo and the hawk, and mostly those I had avoided listening to.
But water evermore.

Suddenly time itself began to speak.
Its whispered call more charming than all birdsongs,
its assuaging cuddle sweeter than a lullaby.
The truth inexorably revealed:
precariousness is but an artifact by the finitude of the human mind.
Time will never be through since it never had a beginning.
We will because we did.

We start to perish the moment we’re born.
Hence—do we live at all?
Is what we're let to have a glimpse of worth the sorrow and the dread?
And yet it is the terror of demise that sets us going,
keeps us alive, has us make our lifespan count.
All contribute to explaining the necessity of an end,
a worthwhile life requires temporality.

I finally felt a bird myself, though neither a cuckoo nor a hawk.
Not scared of flying, happy, singing as perfectly aware of time going by,
always thirsty but quenched with just a drop of water, as small as it may but mine.
Water is life, and life is water slowly evaporating—they say.
However, it mustn’t be like that—says I.
That is—why fear it will eventually run dry?
Don't keep watching your water—drink it, and it will never dissolve.

Only birds,
their unacted desires
and empty hopes
are really volatile.
While God sits back on the shores of Lethe
and perpetually stares into itself.
As it were.

Poet’s Notes:  This poem is about the elusiveness of time, our limitedness, inscrutable thirst for its opposite, and attraction to water, desire to fly, fascination for bird calls and songs, i.e., for all kinds of swindlers, and God, and more--one big metaphor of life's ventures, twists, and lures.
Posted by Steven Wittenberg Gordon, MD at 2:02 PM