Songs of Eretz Poetry Review is pleased to present “Still” by Lee Nash.  Nash lives in France where she freelances as an editor and proofreader. Her poems have appeared or are forthcoming in print and online journals in the UK, the US, and France in: Ambit, Angle, Mezzo Cammin, Orbis, Poetry Salzburg Review, Presence, The Interpreter's House, The Lake, and The World Haiku Review. You can find a selection of her poems on her website: leenashpoetry.com. 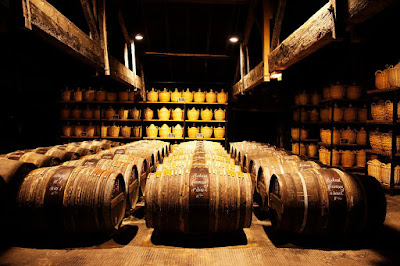 Monstrous metal intestine, hefty
on a bed of bricks, designed to convey drab
must, your ample-bowelled cucurbit (alchemy
from Memphis transmuted though the Arab)
part modern magic, part ancient ritual.
Swan’s neck choked with vapor, copper balloons
flushed, you twice refine that water, your coil
a snaking serpentine through cool.
By these colossal means, subtlety:
steady drops of pure, clear condensate;
from your alembic gut a delicacy
to satisfy the most discerning palate.
The brewers set aside the angels’ share
of eau de vie. And this is only fair.

Poet's Notes:  I live in the Charente department in France not far from Cognac. On a tour of one of the cognac distillery houses, we were shown the alembic or "still," an impressive apparatus for making the eau de vie, which is then aged in oak barrels. Our guide explained to us the phenomenon of "the angels' share," a poetic way of describing "the amount of liquor that evaporates through the walls of the oak barrels in cellars as the Cognac matures over the years before it’s bottled" http://www.cognaccentral.com/2017/04/06/angels-share-cognac/.  What a great subject for a poem, I thought. Some time later (as poems too need to mature) I penned this sonnet.

Editor’s Note:  This is a nice sonnet with a modern flair--and what an interesting topic, too!  I love Nash’s employment of alliteration, assonance, consonance, and hard end-line rhyme here.
Posted by Steven Wittenberg Gordon, MD at 5:03 PM