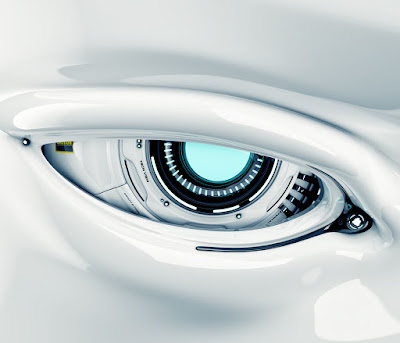 Dr. Nanu on a TV science show
warned us of computers that won’t
shutdown, the ones that keep flashing
for help. He warned us of their egos
generated by some sort of fuzzy logic
algorithm leading to self-awareness.
We can tell by the nano crystals
growing in their circuits, their glow
of sentient green—that smart color


of jealousy, and by their persistence
on holographic screens as if they’re
screaming at us, demanding help,
not in any machine language of zeroes
and ones no longer native to them
but instead, by uttering in our tongue
charged with emotion, a will to live

Poet’s Notes: The title plays on the notion that some embrace—that computers with their artificial intelligence (AI) can/will becoming self-aware. Though I don’t personally believe any of that, it’s still fun to imagine how such an evolution could proceed. Indeed, it would be revolutionary. And in our image—mankind’s—would our creation be rendered. No surprise that the futuristic AI would incorporate contradictions of human characteristics. The closing binary are not random zero’s and ones’s, they spell out “love” and “hate,” respectively.

Editor’s Note:  I find the poem begins prosaically like a newspaper article, then suddenly waxes poetic in the middle of line 9.  Finally, the last three-and-a-half lines feel as though an AI has taken over the piece.  In order to enhance the appreciation of this, I used Times New Roman font for the first nine-and-a-half lines to evoke a newspaper story, then switched to the painterly Blackmoor LET to evoke a poet’s hand, and finally switched to synchro let to evoke the cold, hard digital script an AI might favor.  If the font changes are distracting--all the better!  The poem is certainly disconcerting and thought-provoking--food for distraction indeed!
Posted by Steven Wittenberg Gordon, MD at 5:40 AM