Songs of Eretz Poetry Review is pleased to present “Plague Graffiti” by Beatriz F. Fernandez.  Fernandez’s chapbook, “Shining from a Different Firmament” (Finishing Line Press, 2015), was featured at the Miami Book Fair International in 2016. She’s a former grand prizewinner of the Writer’s Digest Poetry Award and has read her poetry on South Florida's NPR news station.  Her work was chosen in a national competition for the Arte Latino Now 2017 exhibit in Queens College, Charlotte.  For publication news visit beasbooks.blogspot.com.

On these consecrated stone walls
I dare carve your names,
perhaps the last knife wielded
against them by the last hand—
Time past for burials or proper prayers,
only hundreds of flickering white tapers
that burn on and on illuminate these letters,
scrawled in a feverish haste—
Cateryn, Amee and Jane.

The parish priest, dead or in hiding,
may deem a farmer’s daughters unworthy
of remembrance beside the local gentry.
What I inscribe here is not for his eyes,
but for those that may survive.
This scourge that doles out death in equal measure
to silken lords and ragged paupers
makes fools of us and our pretensions—
all that remains hides curled like flies in amber
in the scrolled shadows this scraped plaster casts— 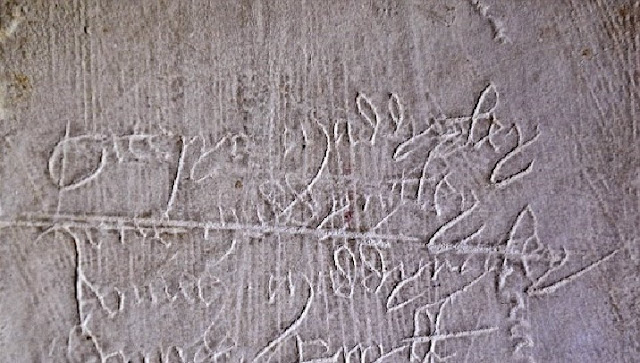 a mother’s love, her daughters’ names,
Cateryn, Amee and Jane.

I flee to the north by nightfall,
the Black Death hounds my shadow.
No choice but to leave you behind, you
who were to be my legacy on this earth,
now lie cast beneath it,
quicklime like first snow
frosting your unmarked graves—
Cateryn, Amee and Jane.

Poet's Notes:  I often write in response to interesting articles that come my way.  In this case it was an article about archaeologists discovering hidden tributes to the dead carved on the walls of medieval churches following bubonic plague outbreaks. They discovered so many they actually had to form groups of volunteers to uncover them!  I tried to imagine how the parents who lost their children to the plague must have felt, needing to run for their lives, not having even enough time to properly mourn their dead, and nowhere to bury them.  Their desperate desire to memorialize the names of their lost loved ones in a sacred place and how it finally came to light centuries later is rather miraculous!

Editor’s Note:  This is a unique and moving elegy that resonates as much today in the age of indiscriminate terror attacks as it would have 500 years ago during the black plague that struck Cambridgeshire.
Posted by Steven Wittenberg Gordon, MD at 5:57 PM