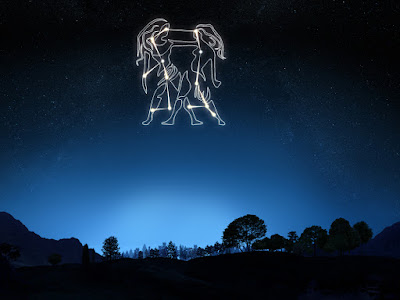 Hikari gazed in the universe's mirror
The waxing, waning milk of the galaxy had her
Lively eyes, reflecting young stars that burned bright although
She saw differently

Yami couldn't turn away, though she wanted to
The universe's mirror showed her pure energy
When her eyes blazed like ancient torches waiting for wind
She would burn out soon

Hikari . . . Yami . . . Though in other ways the same
Eyes fresh and eyes exhausted, stared into each other
Seeing and not seeing, missing the realization
That they weren't alone

Poet's Notes: Since my oldest sister and I have birthdays in May, and both of us fall under the Gemini astronomical sign, I decided to write about twin star sisters. Tying into the “living star” theme of my "Dancing on Stars" poem (previously published in Songs of Eretz), this poem personifies the stars. One was meant to have a bit of my sister's spirit and one mine. It also came from the thought of a lonely person looking in a mirror, thinking he/she and his/her reflection are all alone when they're actually staring at a being that is just as lonely. The twins' names, Hikari and Yami, mean “light” and “dark” respectively in Japanese, a language I've been studying.

Editor’s Note:  This is probably the best I've seen from Sierra, reminding me why I invited her to be an FC.  The theme is powerful--that even twins can look at the same phenomenon and come up with completely different interpretations.  The use of Japanese adds a nice, modern, anime flair.
Posted by Steven Wittenberg Gordon, MD at 4:01 PM