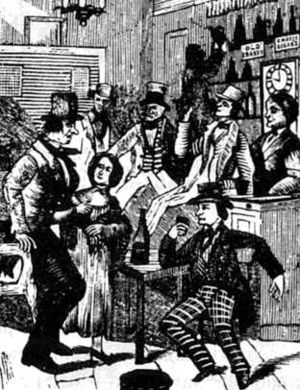 the mystic stumbled
as the dive bar also struggled
for light; and he then noticed
faces of fatigue
with raised caterpillar eyebrows.
In response, he talked about
the beatification of deserving trees
that made great books,
the canonization of all things forgotten
by a growing world.

He expressed his affection
for angelic prisoners
reviving the romance of Paris
in small moments of tenderness
and thunderstorms of passion,
in the greeting of strangers
as old friends,
in the soft music
of consecrated hearts.

He said prayers of intercession
for minds contrary to ruin
and inclined to ruin.
He made known the social dangers
of society, the pure joy
in branches of revival,
reaching out with bending arms
and all the splendor
of colors in liberation.

Poet’s Notes:  This poem is about the town drunk, the kind of man who conversationally corners you and is desperate to express himself, in love, in anger, in emerging fragments of philosophy. Although the patrons of this bar would likely regard the “mystic” as a nuisance, the poem instead treats him with dignity and interprets his words as spiritual revelation. We don’t witness the reactions after he begins speaking. We are deprived of any stark objective reality; the poem is fully aligned with the mystic. So we don’t know whether this was a man who simply had one too many, or whether his wisdom is real and coherent, and of influence.
Posted by Steven Wittenberg Gordon, MD at 2:53 PM