Poem of the Day: “The Bell Ringer” by Jonathan Dick

Songs of Eretz Poetry Review is pleased to present “The Bell Ringer” by Jonathan Dick.  Dick is from Toronto, Canada. He has had over thirty poems published in various literary journals. Follow him on Twitter: @jjdickyboy. 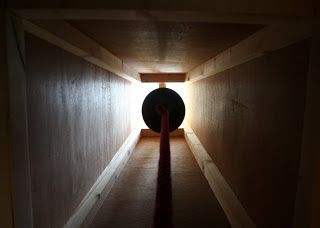 There is a planet in my thoughts,
a planet made from the atoms
of murkiness: darkness perverts
this world entire. it is so cold,
so humanly cold, so taste fear,
with clouds of grey-green holiness,
with winds that shriek and whip
back upon the force of gravitas.
this planet is dead.

In the wind-washed aphasic night
there is only the weight of self
standing on a wooden, rotten, sinking,
watchtower. Hard he pulls
on the braided cord, pulls on the bell,
the bounded bell of cracked sheen.
into the nighted scream, pulling and ringing,
always, for no one,
no one will hear.

He moves the power of the planet
with every pull on the cord,
jolting his naked birth;
a morphed man of grey-green holiness,
he is doomed, bellowing.
sweat rolling in rain-stained streaks
down his pointed face, he stares
into planetary loneliness, the pulsing
ever-night sky.

Poet’s Notes:  A metaphysical poem about loneliness and pain. I often find myself in my mind, ringing a bell, calling for attention. Yet, there is no one to hear me.
Posted by Steven Wittenberg Gordon, MD at 10:29 AM