"I Have Rid Myself of the Best of Me" by James Frederick William Rowe, Frequent Contributor 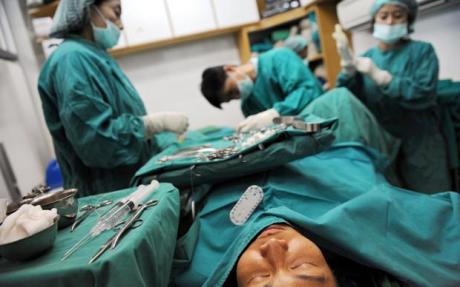 I chose this
And it never should be
That we command the vessel
Which we shall then command
Our suit of skin
Knows suitability
We, so selfish to be sustained
Think only of longevity
Efficiency
But not propriety

I am never going to hear
My heartbeat
Again

Poet’s Notes:  I have often thought about how depressing the notion of transhumanism is and to be perfectly honest I am profoundly frightened of the realization of these technologies. I cannot imagine that we'd have any value to being alive as human beings should we incorporate as machines. I have sincerely considered suicide out of sheer despair for the human condition if we achieve this sort of technology.

I do not recall the full genesis of this poem. I believe I wrote a bit of it on the subway and then ended up finishing it at home. I had moderate trouble figuring out some of the details but I am fairly pleased by the tone.

The concluding stanza is shortened, as I thought the poignancy of the last stanza required that. A full stanza would not have allowed the last stanza to be as evocative and to fixate so strongly on the notion of a lost heart, which is linked back to the first stanza's "I don't feel anymore".

The idea of an entirely plastic human person, that we are capable of choosing everything we are, that we are a neuter, disembodied soul that has no connection to anything outside of our control, is something much in vogue nowadays. Though I recognize that spiritual, immaterial beings are properly speaking sexless, I also recognize that the human personality is more than our thin, spiritual essences, but deeply embroiled in our specific place in space, time, and meat; thus, I do not recognize an infinite malleability of ourselves and an unlimited sovereignty over what we are.

The cyborg is not yet realized, but the idea that we can determine even what is given to us by biology is becoming increasingly the dogmatic, accepted truth, and damn we the dissenters. Transgenderism is simply transhumanism without operating systems and microchips, and my opposition to one informs in part my opposition to the other.

Even this notion of regret has its analogue to the transgender movement.  I have read of many instances that those who undergo the transgender surgeries and hormonal changes often regret that decision later in life, realizing that they are no more happy or well-suited to life even after they resolved their phantom problem of being born "in the wrong body". Sometimes, one must accept what one is and not change.

Editor’s Note:  At first, I read this poem as a strictly speculative piece.  The science fiction parts are realistic.  The speculative moral questions raised are thought provoking.  The fear, horror, and revulsion are palpable.  It is a piece that might have graced the pages of any reputable speculative fiction or speculative poetry venue, and I am proud to have it for Songs of Eretz.

I admit that I did not appreciate the metaphor for transgenderism until I read Mr. Rowe’s notes.  Interestingly, the speaker in the poem could easily be interpreted to be commenting on his or her experience of life BEFORE transgender surgery, not just after such a procedure.

In his notes, Mr. Rowe makes a non-specific reference to the scientific literature to support his (and my, by the way) view on surgery as a treatment for gender identity disorder.  A specific reference may be found here:  http://cnsnews.com/news/article/michael-w-chapman/johns-hopkins-psychiatrist-transgender-mental-disorder-sex-change.
Posted by Steven Wittenberg Gordon, MD at 5:27 PM