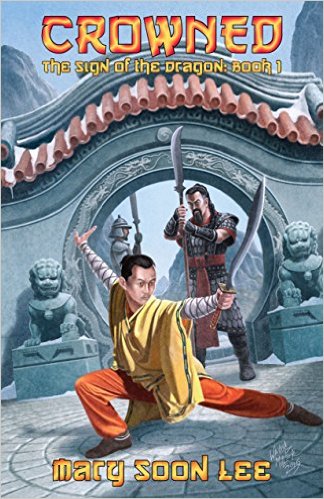 It is rare for me to read a collection of poetry and to enjoy every poem in it.  I daresay such an occurrence would be rare for anyone.  Crowned (Dark Renaissance Books, Brookings, Oregon, 2015) by Songs of Eretz Frequent Contributor Mary Soon Lee falls into this category for me.

Crowned--The Sign of the Dragon: Book 1 is a collection of sixty-one poems centered around Xau, a fictional Mongol-like warrior prince and horse whisperer who, though he is the youngest son, winds up inheriting his father’s kingdom and winning the love and respect of his people and foreign bride and the grudging respect of his enemies.  The collection is about 175 pages in length and is available through Amazon.com http://www.amazon.com/CROWNED-Sign-Dragon-Book-1/dp/1937128741/for $16.95.  It is worth every penny.  The collection is complimented by beautiful and occasionally breathtaking black-and-white illustrations by M. Wayne Miller.

It is important for readers of Crowned to realize at the outset that the collection is an epic poem about a larger-than-life hero.  Detractors have criticized Xau, the hero of Crowned, as being “too perfect.”  Little do these critics realize that such a comment is actually the highest compliment that could be said of the hero of an epic poem.  The hero of an epic poem should be perfect or nearly so--Superman perfect, Odysseus perfect, Beowulf perfect, Aeneas perfect, perhaps with a single but often fatal flaw.  King Xau is such a hero.

That is not to say that every poem in the collection is equally great.  All of them are great, but some are (yes, I’ll say it again) epic.  The poems that tell the story of Prince Xau’s encounter with a prophetic dragon and the story of King Xau’s winning of the hearts of the Horse Lords come immediately to mind.  These and several others in the collection are simply stunning, awe inspiring, and above all memorable.  I will not reveal more lest I spoil.

Two of the poems in the collection, “Companionship” and “Stables,” were first published in Songs of Eretz and may be found here:  http://eretzsongs.blogspot.com/2015/03/poem-of-day-companionship-by-mary-soon.html and here:  http://eretzsongs.blogspot.com/2015/02/songs-of-eretz-poetry-review-is-pleased_24.html.  If you are a lover of fantasy, mythology, and epic poetry, read those for a teaser and then get yourself a copy of Crowned.  It will not disappoint.
Posted by Steven Wittenberg Gordon, MD at 9:14 PM