FC Lee Picks Her Favorites from The 2016 Rhysling Anthology 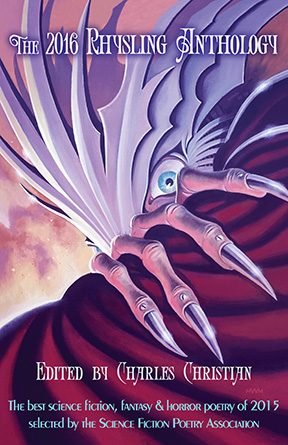 The 2016 Rhysling Anthology edited by Charles Christian  http://www.sfpoetry.com/rhysling.html contains all the science fiction, fantasy, and straight science poems nominated for the 2016 Rhysling Award. I liked many of the 117 poems, admired the skill of many more though they weren't my cup of tea, and loved a few of the poems. Lately I've been drawn more to fantasy than science fiction, yet in this anthology many of my favorites were science fiction or straight science poems connected to space. Of these my favorite was the extract from Simon Barraclough's "Sunspots," closely followed by both "Observations from the Black Ball Line between Deimos and Callisto" by Alexandra Erin, and "Requiem" by Matt Quinn. Three other space poems that I particularly liked were Bronwyn Lovell's "Challenger," Robert Borski's "The Astronaut's Heart," and Mack W. Mani's "And then the stars...." The poem in the short category (under 50 lines) that I enjoyed most was "Attack of the Saurus" by John Reinhart. Another pair of poems in the short category that I very much enjoyed were the gentle "Venice Letting Go" by Sandra Kasturi and "Origami Heat/Light-Defying Spaceship" by Naru Dames Sundar. Two poems that I greatly liked, but found darkly upsetting rather than enjoyable, were Sandra J. Lindow's "Under the Cancer Tree" and J. D. Fox's "The Argument Box." Two last favorites of mine were F. J. Bergmann's "Chronopatetic" and Lev Mirov's "An Unexpected Guest." In addition to the poems I've singled out, there were several others that I think I would have loved if I had understood them more completely. (This is probably my fault: I find many poems hard to fathom.) The two such poems that I liked best were Ruth Jenkins's "Drowned City" and Adele Gardner's "Deliverance."